You want to win your March Madness pool, and the most important decision is the choice of champion. In the standard scoring, the correct choice of champion earns 32 points, a enormous total compared to the 1 point for a Round of 64 game.

Yes, this is your invitation to avoid all of those 12 over 5 seed articles on the internet this week.

Picking a champion requires analytics. At The Power Rank, I’ve developed methods to calculate the win probability for each team, and the top two teams by my numbers have won 8 of the past 16 tournaments.

But in addition to analytics, winning your pool requires knowing which teams not to pick as champion. My previous research suggested avoiding three point shooting teams, or teams that take a large fraction of field goal attempts from three. Before the 2014 tournament, my Grantland article showed that these teams don’t win the tournament. 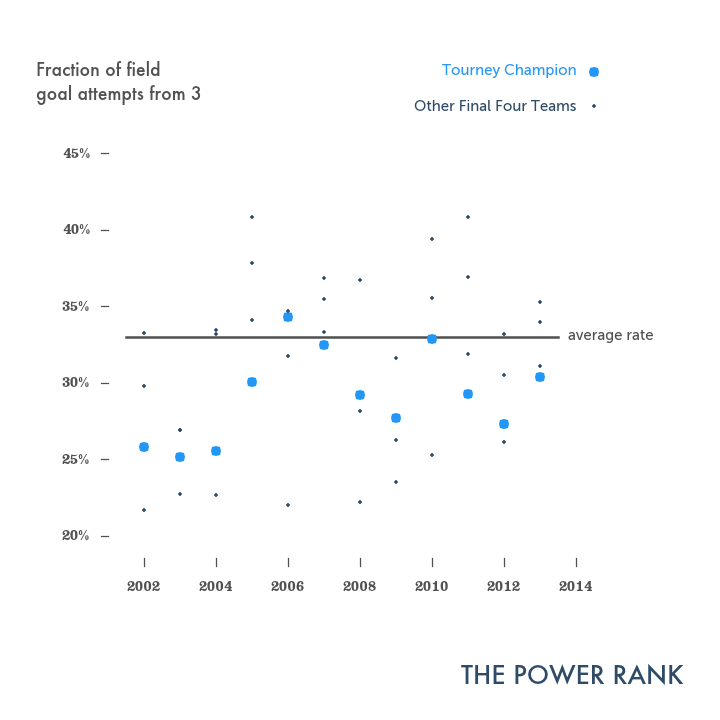 Then I also notice that the year before my data set starts, Duke won the tournament in 2001. They did so by taking a high rate of three pointers both in the regular season and in the tournament. But maybe three point rate doesn’t matter when a team has 5 future NBA players.

Should you still avoid picking three point shooting teams as champion? Let’s examine the argument why you should avoid these teams and then look at the data.

First, let’s go over the argument why three point shooting teams shouldn’t win the tournament. It has to do with variance.

In a typical game with 68 possessions, let’s assume that Team Williams and Team Beilein get one shot per possession. Both teams will score 68 points on average.

However, Team Williams doesn’t score 68 points in each game. In one game, they might score 74, while on another night they only get 58.

If you work out the math, you can show that two thirds of the games of Team Williams land within 8 points of the 68 point average. This 8 points is called the standard deviation of the point distribution.

By shooting only three pointers, Team Beilein has a standard deviation of 12 points. They are more likely to deviate from the mean of 68 points. This increased variance in points makes it more difficult to win the tournament. One off night makes Team Beilein suspectible to an upset.

Live by three, die by the three.

Data on variance in offensive performance

Let’s examine the data on how three point rate affects the variance in offensive production.

To do this, we need to move beyond points per game. The tempo of the game plays a large role in this quantity, as Team Williams might fast break often while Team Beilein prefers the half court game.

To account for tempo, the basketball analytics community has defined points per possession as an efficiency metric. The box score doesn’t track possessions, but one can estimate this quantity from field goal attempts, turnovers, offensive rebounds and assumptions about free throw attempts.

Teams that shoot a high rate of threes should have a high variance in their offensive efficiency. The following plot shows this relationship for the 2016-17 season. 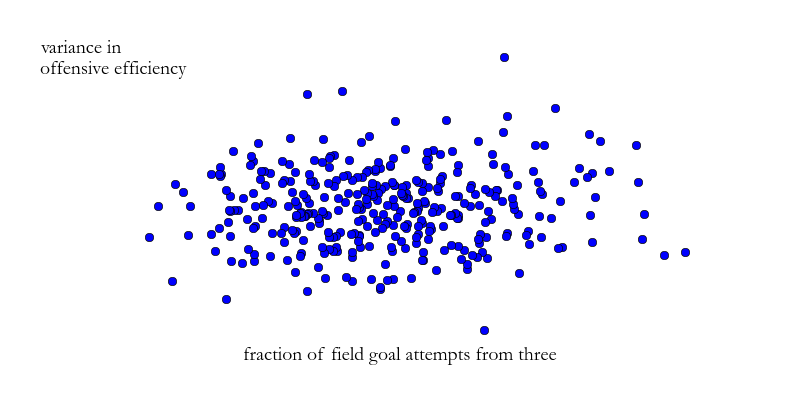 Surprisingly, there’s no statistical relationship between the two quantities. There is almost no correlation between three point rate and the variance in offensive efficiency. The plot looks similar every year in college basketball.

So what’s going on here? The original Williams versus Beilein argument still holds. If you shoot threes, you increase the variance in your point production since each made shot gives 3 points instead of 2.

To explain the results, other factors must dominate the variance in offensive efficiency. These sources could include the following:

So why didn’t we see many tournament champions that shoot a high rate of three pointers?

In 2014, I first looked at 12 years of data and found no tournament champions that took a significant fraction of their field goal attempts from three. But maybe the numbers suggest none of these teams should have won.

To study this, I isolated teams that took over 40% of their shots from behind the arc and added up their win probability by my pre-tournament numbers. This sum gives the expected number of three point shooting teams to win.

From 2002 through 2013, you would expect 0.584 teams to win the tournament on average. With such a low average, it’s quite possible that no three point shooting teams won the tourney over this 12 year stretch.

Looking towards the future 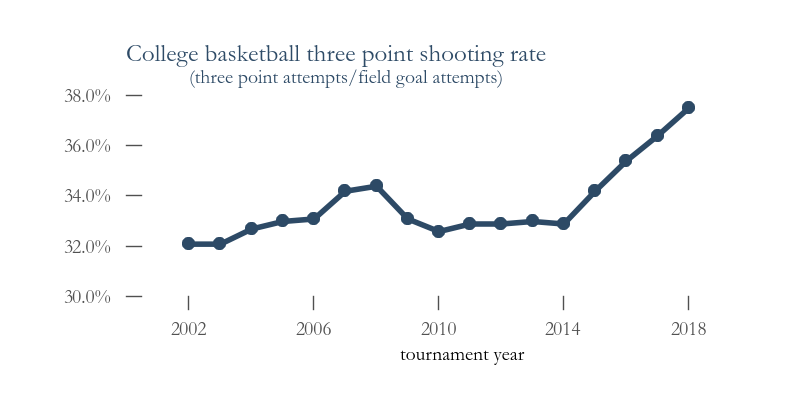 Perhaps the analytics revolution has convinced coaches of the efficiency of the three point shots. In this current season, college basketball teams averaged 1.05 points on three pointers compared to 1.00 for two pointers.

Or perhaps kids idolize Steph Curry and want to imitate his exact shooting motion on three pointers. Whatever the reason, college basketball has featured an explosion in three pointers, and this makes for more contenders with high three point rates.

In this season’s list of contenders to win the tournament, Villanova shoots the highest rate of three pointers at 46.5% of their field goal attempts. This isn’t a surprise, as the Wildcats have topped 40% for each of the past 5 seasons.

Villanova has the highest tourney win probability at 29.2%, a calculation based on my college basketball team rankings. However, they play a 6’8″ stretch four as their center. This might have caused their drop off in defense, as they rank 20th in my defense rankings by adjusted efficiency. Villanova hasn’t ranked worst than 11th the previous 4 years.

While Villanova always shoots a ton of threes, Kansas usually does not. However, the Jayhawks have attempted three pointers on 41.5% of field attempts this season. Bill Self has opted for a four guard line up to optimize personnel.

Purdue is a third contender that shoots a high rate of three point shots. With players like Carson Edward and Dakota Mathias, the Boilermakers have made 42% of their three pointers. They also play defense, as they rank 16th in my adjusted efficiency. Expect them to play Villanova in the East Region’s Elite Eight game.

The data suggests not avoiding three point shooting teams to win the tournament. And with the changes in college basketball, it’s getting more difficult to avoid these teams.