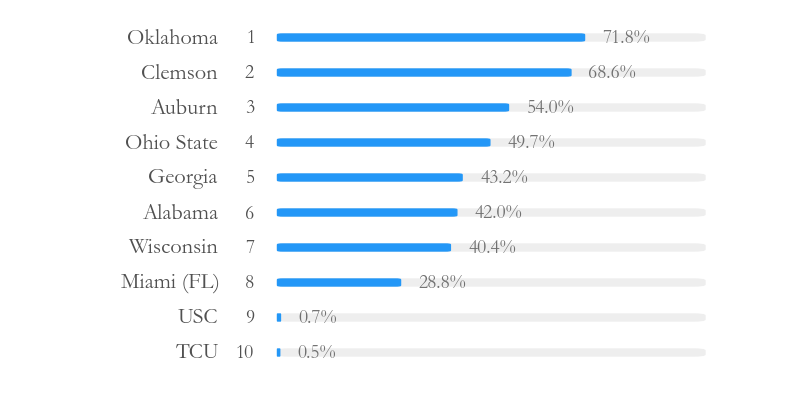 Alabama sits at 5th in the committee rankings after their loss to Auburn. They will not play on this upcoming championship weekend.

The four teams ahead of Alabama (Clemson, Auburn, Oklahoma, Wisconsin) all play in their conference championship game. If these teams win, they’re in.

By my numbers, there’s a 10.6% chance all four of these teams win. If one loses, it opens the door for Alabama.

The problem for Alabama is that the 3 teams below them (Miami, Georgia, Ohio State) also play in conference championship games.

The remaining opponent of one of the top 4 teams is TCU at 12th. If TCU wins, they most likely don’t jump into the top 4, and Alabama makes it. My numbers give this a 28.9% chance.

What if TCU loses but one of the other teams below Alabama wins? It depends on whether the committee moves this freshly minted conference champion ahead of Alabama.

In my simulation, I have a parameter that assigns a probability to whether a conference champion moves ahead of an idle team. In the results above, I assume a 90% chance, which results in a 42% playoff chance for Alabama.

It’s difficult if not impossible to assign a precise value to this parameter. It’s an attempt to model the behavior of fickle human beings.

You could have a detailed model of this based on the record of the teams, strength of schedule, etc. However, with only sparse data, I choose to make it simple: one parameter fits all teams.

If you assume a conference champion automatically jumps one spot over Alabama, then their only chance is a TCU loss. Their playoff odds are 28.9%.

If you assume a conference champion never jumps over Alabama, then they make it if at least one team loses. This probability corresponds to 89.4%. (Take 100% minus the 10.6% chance for all teams to lose).

The truth lies somewhere in between. FiveThirtyEight gives Alabama a 30% chance, the conference champion automatically jumps Alabama scenario. Massey-Peabody puts Alabama’s chances at 70%, suggesting that a new conference champion has a low chance to jump over the Crimson Tide.

What’s the chance Alabama makes the playoff? We really don’t know, but this outlines the range of possibilities.