How is Michigan’s offensive line developing? As Tony Kaminski wrote, there were high hopes heading into the season that Jim Harbaugh could replicate the rushing success of his Stanford teams.

To measure the contribution of the offensive line on running plays, we look at Line Yards, a metric developed by Football Outsiders.

As the visual shows, Harbaugh saw a sharp increase in line yards for his Stanford teams. His first two Michigan offensive lines have disappointed. 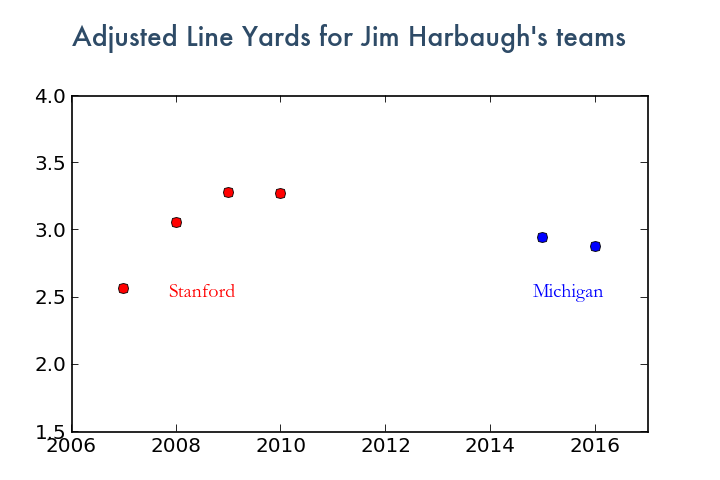 Based on play by play data, here is the line yards for Michigan in the 2017 season.

The offensive line did a good job run blocking against Michigan State and Penn State, an easy thing for Michigan fans to miss in two difficult losses. I was shocked at the Penn State number.

In addition, Indiana has a solid defense as well. The last 4 games have been a stark contrast to the poor performances against Cincinnati, Air Force and Purdue (who might have a decent defense).

How about pass protection? This shows the sack rate allowed for Big Ten teams.

Despite not allowing a sack against Rutgers, the pass blocking has been bad in 2017.

The numbers suggest that Michigan’s offensive might be improving in run blocking, but has struggled in pass protection.

Thanks to the Michigan Sports Analytics Society, as I wrote the Line Yards code as part of a lesson I presented at one of their meetings.