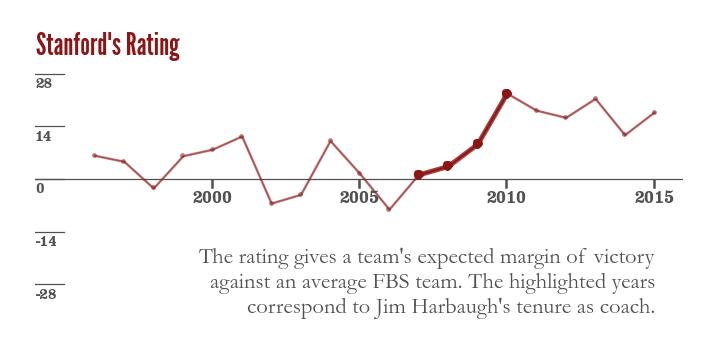 In the HBO series Entourage, Vincent Chase is the big movie star. He takes the leading role in the biggest Hollywood movies, then does what he wants with the ladies around town.

Then he meets Mandy Moore. They date twice. It ends twice, with Vinny on the break up diet of orange juice and crackers both times. Even the the most desirable people meet their match, and for Vinny it was Mandy Moore.

Just like Vinny, The Power Rank’s preseason rankings are typically stellar. Over the past 3 season, the model has predicted the game winner in 70.8% of games (1452-598 with no prediction in 235 games), a rate that doesn’t include cupcake games with FBS teams against FCS opponents.

Note that the preseason model makes these predictions without using any data from the regular season.

While I’m usually confident in the predictions of this model, Jim Harbaugh broke it this season. Let me explain.

The model feature that doesn’t apply to Michigan

My preseason college football rankings come from a regression model that considers the last 4 years of team performance, turnovers and returning starters. The team performance comes from my ranking algorithm that takes margin of victory and adjusts for strength of schedule.

Four years might seem like a long window to use, but college football teams tend to persist in their performances from season to season. Alabama has the tradition, financial resources and the coach to stay near the top of college football every season. Rice has none of these advantages to dig them out of the bottom of FBS.

Because of this 4 year period, the preseason model gives poor predictions when teams get better or worse in a rapid manner. To see this, check out the visual of Jim Harbaugh’s tenure at Stanford, which shows their rating, or an expected margin of victory against an average FBS team.

Any model that attempts to predict Harbaugh’s 3rd year at Stanford from the previous four years would underestimate the strength of that team.

For Michigan in 2017, the preseason model has the same problem. Harbaugh has been coach for two years, so the model still considers the last two seasons of the Brady Hoke era.

To make things worse, Michigan returns only 5 starters, the lowest in all of FBS. This contributes to my preseason rank for Michigan of 30th.

From following this team closely, a rank of 30th is too low. I’ll make an adjustment to this model before calculating a win total for Michigan in 2017.

Beyond the clear problems of using a large window of team performance, a look at the roster gives other reasons for optimism.

Neither Rashan Gary nor Maurice Hurst, defensive linemen, count as returning starters. However, the two combined for 16.5 tackles for loss last season, and both players have the potential to be first team All-American.

Michigan loses all of their starters in the secondary. While this would be a concern for most teams, most Michigan fans believe there’s enough talent to perform well in 2017. The same holds for the receivers on offense that will get the ball from QB Wilton Speight.

The big question for Michigan in 2017 is the offensive line. This unit struggled last season, making the NFL starters that Harbaugh and offensive line coach Tim Drevno turned out at Stanford seem like a distant memory.

If Michigan performs anywhere near where my preseason model predicts, the offensive line will take the blame.

To check out the full 2017 preseason rankings, click here.