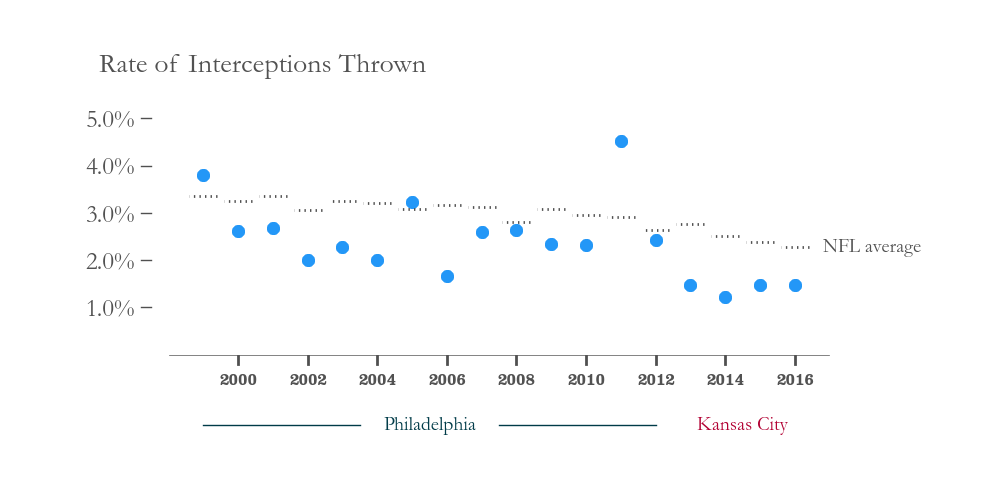 Andy Reid’s teams throw a low rate of interceptions. The visual shows how his teams in Philadelphia and Kansas City have had a lower than NFL average interception rate (interceptions divided by attempts) in all but 3 of 18 seasons.

Reid’s Eagles had a particularly good stretch of pick suppression from 2000 through 2004. Led by quarterback Donovan McNabb, Philadelphia never won fewer than 11 games in any of those 5 seasons.

Despite a decreasing interception rate across the NFL, Reid has continued to beat the NFL average over the past four years in Kansas City. Led by quarterback Alex Smith, the Chiefs have won 43 regular season games and never dipped below 9 wins in any one season.

The visual goes against the typical quant narrative that turnovers are random.

For example, I’ve shown this visual that shows the relation between interception rate the first 6 games of the college football season versus the remainder of the season. 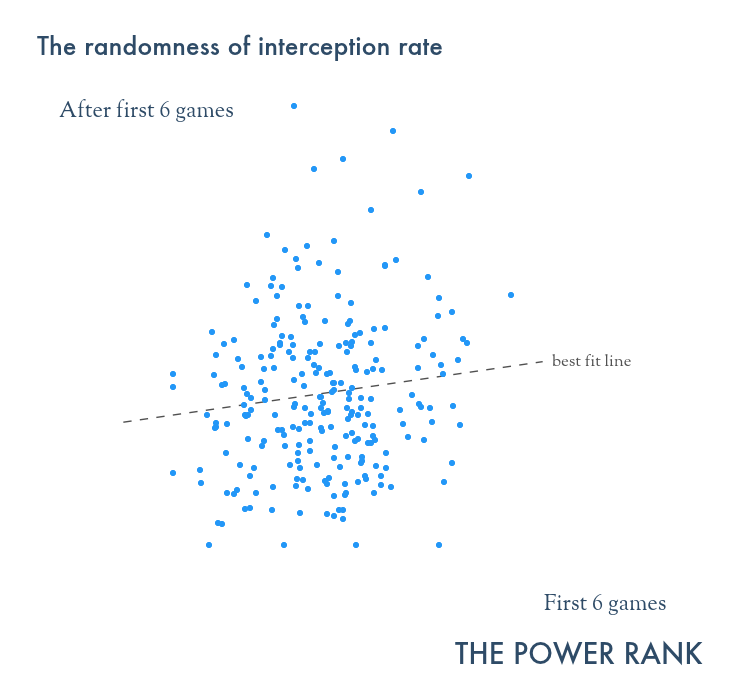 The lack of correlation between these quantities shows that you can’t predict a team’s interception rate later in the season based on the same quantity during first 6 games.

Randomness certainly plays a role in interceptions. No one who has ever seen a tipped pass fall into the hands of a defender should doubt that.

However, the Reid visual suggests that some coaches can suppress interceptions over a very large sample of games.

This has implications in predicting the outcome of the Steelers at the Chiefs playoff game this weekend.

Kansas City doesn’t seem like much of a Super Bowl threat with the 16th and 11th ranked pass offense and defense, respectively, by my adjusted yards per attempt. I use these pass efficiency numbers to evaluate teams for two reasons:

However, if Kansas City is truly skilled at not throwing interceptions, then these pass efficiency numbers will underestimate their team strength.

I interviewed Ben Alamar on the Football Analytics Show this week, and his FPI (Football Power Index) makes the Chiefs nearly a 5 point favorite. They use an expected points added, a metric which accounts for interceptions but their own twist. To listen to that part of the discussion, go to 14:50 of my interview with Ben Alamar.