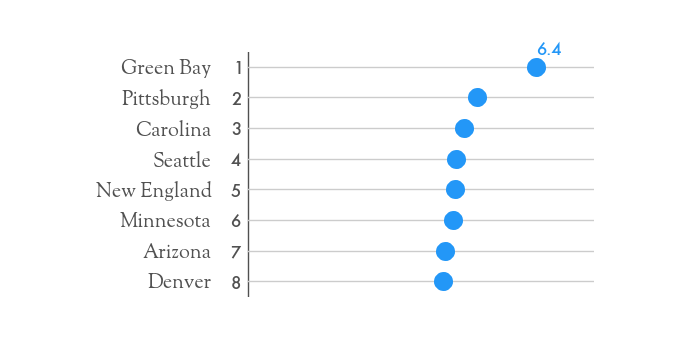 It seems particularly hard to do quality early NFL rankings this year.

None of the preseason favorites have looked great. Carolina has regressed from last season. Seattle’s offense got off to a slow start.

The rankings above combine preseason expectation with team rankings based on limited data from the current season. It has Green Bay as a definitive number one.

I disagree. Aaron Rodgers doesn’t look right. Against the Giants, he had all the time in the world to throw, and he faced a secondary missing key starters. Still, the Packers only threw for 5.8 yards per attempt, below the NFL average.

I also calculate rankings for members of my site that use more predictors than the public rankings. These extra predictors are based on pass efficiency (yards per pass attempt, a strong predictor of success) and market data.

Here are the member rankings:

If Carolina and New England swapped places, this would be a pretty solid impression of a messy NFL in 2016.

In addition, these member rankings drive predictions that have gone 58.4% this season against spreads taken from Wednesday each week. This is an unsustainable win rate, but if you’re in an NFL pool, you might want to check out becoming a member of The Power Rank.

To see the most current, full NFL rankings, click here.