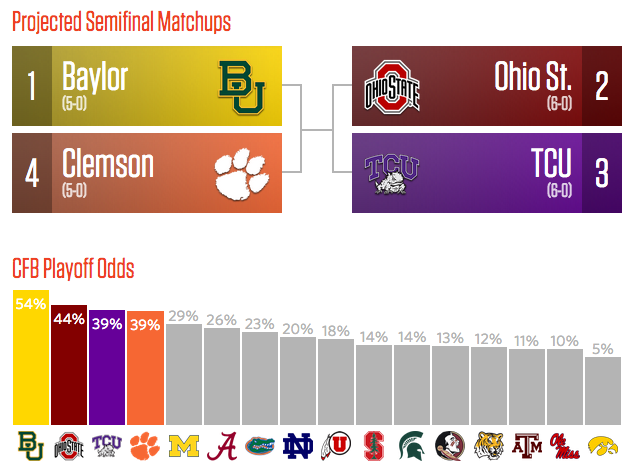 I made some changes to the algorithm that calculates playoff probabilities for college football.

The playoff committee rewards conference champions, and the simulation now makes appropriate adjustments for those who have a better chance to win their conference. A team that doesn’t win its conference can still make the playoff, but its likelihood decreases with more losses.

In addition, the simulation acknowledges the small chance that a team outside a Power Five conference makes the playoff. (This doesn’t apply to Notre Dame.) These teams can still make the playoff, but it’s unlikely unless they go undefeated.

The changes had some obvious consequences for Boise State, Houston and Toledo for teams from the Group of Five. However, they also impact Alabama in an unexpected way.

Also, Michigan has emerged as a playoff contender.

To read my full analysis over at Bleacher Report, click here.