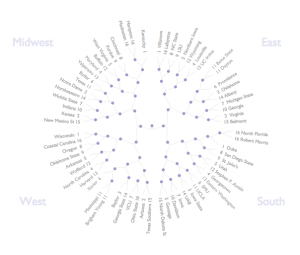 You have a lot of choices for predicting the NCAA tournament.

My probability for each team to advance through each round appear in this interactive visual. However, these other quants perform the same calculation.

Which tournament win probabilities were the most accurate in 2015?

Reuben Fisher-Baum of FiveThirtyEight took a quantitative approach to determining which tournament predictions were most accurate. He looked at how a predicted probability deviated from the actual result in the tournament.

For example, my numbers gave a 70.7% chance for Duke to advance to the Elite 8. Since Duke did advance to that round, we assign that result the number 1.0. The square of the deviation, or (1.0 – 0.707) squared, gives a Brier score for that prediction. For an event that happened, a larger probability is better, so a lower Brier score implies a better prediction.

From FiveThirtyEight’s analysis, The Power Rank had the most accurate 2015 tournament predictions. 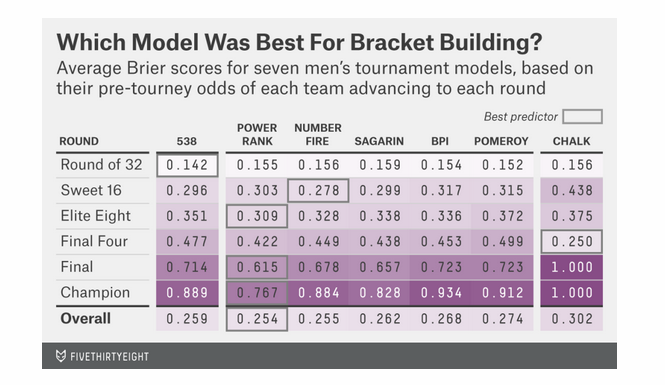 Duke’s run through the tournament helped out my method rise to the top. Of all the models, my numbers had the highest probability for Duke to advance to the Sweet 16 and every round after that.

Given that Duke is traditionally undervalued in bracket pools, fans who built their brackets on The Power Rank’s numbers likely had a pretty good tournament.

Indeed, some people did have such success.

Ryan Peters bought my book on how to win your pool and knew the importance of picking a value champion, or a team with a high win probability overlooked by others in his pool. He chose Duke and sent this tweet on the eve of the championship game.

@thepowerrank used your advice for all 3 of my brackets with contrarian champs, duke can win me two different pools thank you sir #doingwork

I had Duke ranked third in my team rankings heading into the tournament. They got credit for playing a tough ACC schedule which included Virginia, Notre Dame (3 times), North Carolina (twice) and Louisville, all top 20 teams in The Power Rank. These strength of schedule adjustments moved Duke higher compared to other rankings.

The Power Rank came out on top this year, but don’t expect these results every year against stiff competition. One tournament represents a small sample size of 67 games. Had Kentucky won the tournament like my numbers expected (38% win probability), the results could have been different.