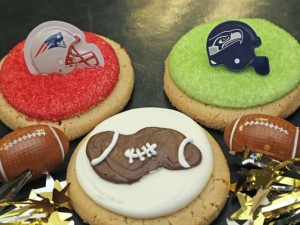 Is there any edge in this Super Bowl between New England and Seattle?

The numbers slightly favor Seattle. I aggregated my numbers at The Power Rank with 8 other trusted sources, and this ensemble predicts Seattle by 0.46 points. This corresponds to a 51.3% win probability for Seattle.

The match ups do not seem to suggest an edge for either team. Frank Brank broke these factors down, and nothing persuaded him to favor either side.

However, there’s one additional consideration, and it comes from looking at the Patriots fumble data. I know, you might be sick of Deflategate and the fumble data. If so, check out this video for comic relief.

But there are missing insights in the fumble data. Let me explain.

After the AFC championship game, a report claimed that 11 of the 12 Patriots game balls were deflated during the game. This lack of air pressure makes the ball easier to catch and not fumble, simple physics that makes sense to me.

Then Walter Sharp published some interesting data on the Patriot’s ball security. Over the last 5 seasons, they average 187 plays between fumbles lost, a much higher average than any other NFL team over this time.

To understand ball security, it’s more important to look at all fumbles, not only those lost to the other team. The Patriots have also excelled in this category, going 73 plays between fumbles over the last 5 years. Only Atlanta and New Orleans have fumbled less.

If you believe the Patriots are cheaters (not unreasonable given Spygate and Deflategate), this data supports your case. The Patriots purposely played with deflated balls, which allowed them to have better ball security.

The problems with this fumble data

However, there are many problems with this analysis. If you want to get it right, you should break down the Patriots fumbles based on who had the ball. This requires looking at play by play data to separate QB Tom Brady, ball carriers, receivers and special teams.

Deadspin looked at fumble rates on carries and receptions for the Patriots. Since 2007, their ball carriers have led the NFL, but not by a significant margin. For fumbles after catches, they’re third. For this data, check out the bottom part of this article.

This suggest the Patriots ball security boils down to Brady and special teams. Since Brady handles the ball far more than punters and kick returners, the Patriots low fumble rate is most likely due to him.

This data suggest that quarterbacks have some skill in protecting the ball. Most likely, Brady does this well, deflated ball or not. We’ll see if he can continue his elite ball security, even with that nagging cold he’ll drag into the Super Bowl on Sunday.

The missing insight from this fumble data

The Patriots are in the top 3 of fumbles but by far the best at fumbles lost. This suggests looking at the rate at which they recover these fumbles.

From Sharp’s data, we can estimate the fraction of the Patriot’s fumbles that they recover. Since 2010, they have jumped on 61% of their fumbles (51 of 84 fumbles), much larger than the expected 50-50 on fumble recoveries. Based on these 84 fumbles, their fumble recover rate is better than 2 standard deviations lucky.

Fumble recoveries do depend on where on the field they occur. Looking at huge sample of college football plays, Brett Theissen found that the offense recovers more fumbles on their side of the line of scrimmage (e.g. strip sacks of the quarterback) than downfield (e.g. fumble by a receiver after a catch).

If we can infer from the Sharp and Deadspin data that Brady doesn’t fumble at a high rate, then more of the Patriots fumbles occur downfield. This makes their 61% fumble recovery rate even more incredible.

And this fumble recovery rate has nothing to do with deflated footballs. Even the most conspiracy theory loving, Patriots hating fan will find it hard to argue that they’re better at jumping on bouncing footballs, even if they lack the proper air pressure.

Which side to take?

The data suggests Tom Brady is good at holding onto the ball and the Patriots offense has been incredibly luck with fumble recoveries. The latter should not continue into the future.

This makes me lean towards Seattle more, although not much more. The side is only enticing if you can find New England as a 1 or 2 point favorite.