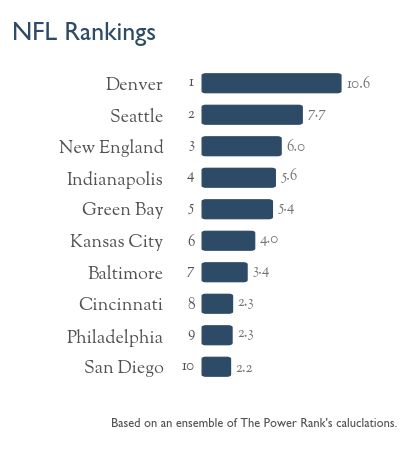 Even Seattle’s 14 point win over Carolina was closer than it seemed. Carolina moved the ball regularly against the Seattle defense and threatened to make it close until the interception return by Kam Chancellor, who played as well as any defender I’ve seen all season.

Moreover, Denver might have given Indianapolis a better game if Peyton Manning didn’t have a torn quad muscle. Somehow, news of the injury came out only after the game, as the line moved from 7 to 9.5 in favor of Denver before the game.

The bookmakers did their job, though. According to Sports Insights, every game closed pretty close to a 50% split for each game. Last week’s games certainly suggests taking the points this week.

The Colts dominated the Broncos in Denver. That’s incredible. The news about Peyton Manning’s torn quad didn’t surprise me. However, his receivers were blanketed for most of that game.

I thought Manning blatantly missed an open receiver only a few times. As we’ve realized before, this Colts defense is a little underrated.

The Patriots front have only given up sacks on 3.6% of drop backs as Tom Brady typically gets the ball out quickly. The Colts will have to blanket more receivers this week if they want a chance to win.

The biggest mismatch is Rob Gronkowksi, as usual. The Colts aren’t exactly known for their linebacker play. If they don’t move safety help or move a corner over to handle Gronk, he could have a huge game.

Even moving a capable body over to handle Gronk leaves so many options for Tom Brady. Defending Brandon LaFell, Julian Edelman, the resurrected Danny Amendola, and Shane Vereen out of the backfield is an insane task.

Not to mention, the Patriots offense completely ditched the run last week. They rushed once in the second half, and it was a Tom Brady quarterback sneak. Since passing has been 54% more efficient by yards per play than rushing in the NFL this season, this approach should only increase their likelihood of winning.

The Patriots defense doesn’t have it any easier. Andrew Luck doesn’t have the quick trigger like Brady or Manning, but he does have superior mobility inside and outside the pocket. He also is supported by an impressive offensive line.

Andrew Luck has had clean pockets for the last three weeks, hardly being touched at all. I was mildly surprised the Patriots weren’t able to pressure Joe Flacco last week, especially in the first half. Considering the Patriots front has about an average sack rate, I expect Luck to have some time and find his speedy receivers.

Bill Belichick typically puts Darrelle Revis on the opposition’s best receiver (T.Y. Hilton for the Colts), and matches up Brandon Browner with safety help on the next best receiver. This is what makes Belichick so efficient on defense; he makes other teams beat them with guys they don’t want to use.

For this week, that leaves Coby Fleener and Dwayne Allen, two capable tight ends, to get open and exploit their defense in the middle of the field. Joe Flacco and the Ravens were able to do this last weekend.

It wouldn’t surprise me to see Browner move in to cover Coby Fleener. However, that still leaves some decent match ups for Donte Moncrief and Hakeem Nicks.

Playing in Foxboro is clearly a big advantage for the Patriots this time of the year. The Colts play their home games in a dome.

The Power Rank’s ensemble predictions give a field goal advantage to the Patriots. I couldn’t agree more. Both these offenses will have success and keep this game close. Be sure to take the points, especially while you’re getting the whole touchdown. [Editor’s note: the line moved to New England -7 to -6.5 from the time Frank submitted this draft to publication on Wednesday afternoon.]

The Packers are the beneficiary of some controversy this week as they advanced with the help of instant replay and a questionable rule. By the transitive property, the Seahawks will be the team receiving the benefit this week.

In all seriousness, the Seahawks secondary is terrifying. Kam Chancellor changed the outcome of last week’s game on his own. Richard Sherman may be the most sure-handed cornerback in the NFL. Teams that attempted to run to counter their defensive backs are stopped by a front seven that allows 3.49 yards per rush, second best in the league.

The one weakness of the Seahawks defense is the pass rush. And a lack of pressure against Aaron Rodgers will doom them.

I was actually surprised how well the Cowboys defense contained Rodgers last week. In the second half, though, he really caught his stride and threaded the needle through some tight coverages that doomed the Cowboys.

The aspect that ruined the Panthers last week was turnovers. Even with a costly fumble and an interception, the Panthers found themselves near the Seahawks ten yard line with the opportunity to make it a one possession game. Then Kam Chancellor squatted on a route and took the interception to the house, effectively ending the game.

Aaron Rodgers is the best quarterback at avoiding interceptions (career pick rate of 1.6%). I can imagine he will have success against nearly any defense.

Unlike Belichick’s approach, the Seahawks keep Richard Sherman generally on one side of the field. This gives the Packers the opportunity to move Randall Cobb and Jordy Nelson on the other side of the field or in the slot, which they do often anyway, providing some favorable match ups.

I still can’t buy into the Seahawks offense, ranked 17th by The Power Rank. After I bashed them last week, the Seahawks put up 31 points. But points can be deceiving.

The Seahawks scored touchdowns on the mentioned pick-six, a 63 yard pass, and after a fumble on the Panthers own 20 yard line. These are all unsustainable ways to continue to score. They only really drove down the field and scored once on the Panthers defense.

I am not trying to compare the Packers defense (24th) to the Panthers defense; the Panthers are much better. However, the Packers don’t need to be great, though, to give themselves a chance to win against this Seahawks offense that depends upon their own opportunistic defense.

The books have lined this game at Seahawks -7.5 which seems a bit inflated to me even with reduced mobility of Aaron Rodgers (slight tear in his calf). Any time you can get north of seven points in a football game, it’s good value. This game is no different.

I like the Packers to cover, and Aaron Rodgers always gives you a chance to win. The Power Rank’s ensemble predictions concur and give the Seahawks a 4.9 point edge (about 63% to win).

Thanks for reading and enjoy the few remaining games. Since I no longer have a horse in the race, I’ll be rooting for a Packers-Patriots Superbowl as that would seem to me to be the most entertaining to watch.

Frank Brank founded cheapseatanalytics.com, a site devoted to analytical sports information and betting systems. He majors in baseball but also covers the NFL and NHL. You can follow him on Twitter @realFrankBrank.