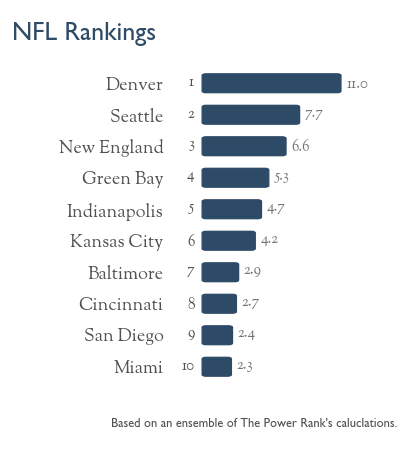 Week 17 of the NFL is one of, if not the hardest, week to predict outcomes of football games. You must consider which teams will play full out and which will sit starters or play cautiously. To avoid these situations, let’s focus on important games to both teams.

The analysis below is based on calculations available to members of The Power Rank. The offense and defense rankings for passing consider yards per attempt and adjusts for strength of schedule, since the NFC South is just that bad.

The team rankings shown in the visual aggregate these offense and defense rankings with calculations based on margin of victory. The predictions come from these ensemble rankings and add a constant factor for home field.

Sadly, either the 22nd or 28th best team by The Power Rank will win the NFC South and host a playoff game.

When evaluating football games, a large portion of the analysis and focus should depend upon the offensive and defensive match ups for each team. I believe the Panthers have a decent advantage on Sunday.

The Falcons have the worst pass defense in the NFL. They also don’t pressure the quarterback, ranking 31st in sack rate.

On the other side of the ball, the Panthers don’t throw the ball particularly well but I don’t foresee much of an issue against this defense.

The Panthers offensive weakness is pass protection, as they rank 22nd in sack rate allowed despite having an extremely athletic, mobile quarterback in Cam Newton. However, the Falcons front can’t get to anyone, so Newton will have success running and throwing the ball.

Contrary to popular belief, the Falcons have been just slightly above average on offense. They rank just one half of a yard ahead of league average in adjusted yards per pass attempt.

Similarly, the Panthers pass defense has been just slightly above average this season. As they’ve gotten healthier and as the season has worn on, they’ve gotten better, allowing more than 20 points in one of the last five games.

The ensemble predictions suggests a one point win for the Falcons. The public has backed the Falcons at a three to one rate early, moving the line from Falcons by three to Falcons by four already.

I’d gladly take the Panthers north of three points with the money line having some value as well.

Now that the Cowboys have clinched a home playoff game, this game will be a matter of seeding in the upcoming weeks.

Like I wrote last week, the Cowboys are the most hot and cold team in the eyes of the public. If they are winning, they’re highly respected. If they are struggling, they get no public backing.

Looking back on it, it’s somewhat comical that the Cowboys were four to five point underdogs at Tennessee in Week 2.

I also wrote last week about the one fatal flaw in Robert Griffin’s struggles and how he could exploit the Eagles poor secondary with a little bit of time in the backfield. As the Cowboys have generated very little sacks on defense (4.6% sack rate), Griffin should be able to find similar success against a bottom five secondary.

There’s also a chance the Cowboys play it a little safe in this game. Sure, seeding is important in the playoffs, but keeping everyone healthy could be equally important for an offense that relies heavily on their offensive line and just a few skill position players.

There’s little chance the Redskins have given up at this point. Robert Griffin is playing for a starting job next year, whether it’s with the Redskins or another team, and DeSean Jackson definitely hasn’t taken a play off.

This match up is much closer than one would expect as both teams do not play defense. The six and a half point line is too many points to lay for the slightly better defense at home. If you move this game to Dallas, this line would suggest the Cowboys to be nearly two touchdown favorites.

That’s too many points to lay for a cautious team with a horrendous secondary. The Skins have another chance to win this week. The numbers agree, giving the Cowboys an edge of only 1.4 points.

The game of the week is Cincinnati traveling into Pittsburgh for the AFC North Championship and the opportunity to host a playoff game. Considering how well both of these teams have played in recent years at home, this game should be of high importance to each team.

Most of the public, and the books, will more than likely remember the 21-point win by Pittsburgh in Cincinnati just a few weeks ago. However, the full season statistics suggest the Bengals have better match up with the Steelers this week.

The Steelers have the 4th best pass offense while the Bengals feature the 7th ranked pass defense, which is surprising. It’s safe to expect the Bengals to hold the Steelers offense under 42 points this time around.

The mismatch comes on the other side of the ball. The Bengals passing game hasn’t performed as well as one might expect from their talent. But the Steelers pass defense is bad (30th) and has been exploited over the top.

The Steelers have won games with big plays on offense. It’ll be a little harder this week against a good, underrated Bengals defense.

A standard three points to the home team gives the Steelers a slight edge. The Power Rank says Steelers by a point. Flip a coin, the last possession determines the outcome in the game of the week.

Thanks for reading. We’ll cover all of the games next week as the playoffs get underway.

Frank Brank founded cheapseatanalytics.com, a site devoted to analytical sports information and betting systems. He majors in baseball but also covers the NFL and NHL. You can follow him on Twitter @realFrankBrank.