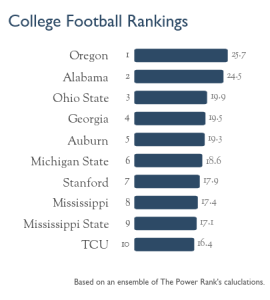 You want to know which teams will win a bowl game. A predicted margin of victory would also help with your bowl pool.

The Power Rank’s bowl predictions are based on aggregating a number of different predictions. These ensemble predictions should outperform the prediction from any single method.

The first predictor comes from my team rankings, the first calculations on this site. After developing a ranking algorithm based on the mathematics of randomness, I applied it to margin of victory in football games. The method accounts for strength of schedule and devalues the effect of blow outs.

Now, I also apply the ranking algorithm to yards per play to rank offenses and defenses. This gives an alternative perspective on teams immune from the randomness of turnovers.

The ensemble also considers my preseason rankings. It might seem silly to use such dated calculations. However, team strength tends to persist from season to season. From 2005 through 2013, the higher ranked team in the preseason rankings have won 60.3% of bowl games, almost as good as the 62.3% accuracy of the team rankings.

You might have the time to watch all 39 post season college football games, but probably not. Which games should you choose?

The predictions below rank bowl games based on two criteria. First, the game rankings consider the strength of the two teams. You’d rather watch Alabama and Ohio State than Utah State and UTEP.

The second criteria for the game rankings is closeness of the outcome as estimated by the ensemble predictions. Arizona and Boise State might not be top 10 teams, but my methods predict a 50-50 game that might be decided by single play. That makes it worth tuning into the Fiesta Bowl.

The number next to each team gives their rank in my ensemble rankings. The top ten teams are shown in the visual at the top of this article.

These ensemble predictions are different from those that I’ve posted this season on the blog. Those sample predictions each week also incorporated data from the betting markets.

These enhanced ensemble predictions, which we use to make picks for spreads and totals, are available members. To learn about becoming a member, click here.