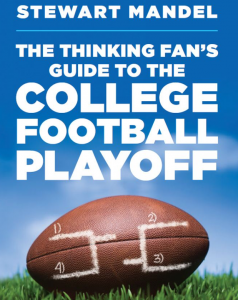 You’re interested in this new college football playoff. You already know that a selection committee picks four teams for the bracket. However, the new system will have a greater impact on the postseason than just 3 playoff games.

Stewart Mandel, a former writer at Sports Illustrated who has moved to Fox, provides perspective on all the changes in The Thinking Fan’s Guide to the College Football Playoff. I’ve been reading Mandel for years, and I devoured his short book when I first learned about it this fall.

This past Sunday, I reread through some critical chapters to refresh my memory about the changes to college football’s postseason. Here are my take home points.

The committee does more than pick 4 teams

The selection committee not only seeds the top 4 teams in the playoff bracket but also picks the match ups for four other bowl games. These six games take place on New Year’s Eve and Day and are now called The New Year’s Six.

To fill these six games, the committee must first adhere to some rules. For example, the Orange Bowl must have an ACC team since the bowl has a contract with the conference. Moreover, the highest ranked conference champion of the Group of Five (those other conferences that rarely get headlines) is guaranteed a spot in a New Year’s Six Bowl.

After these rules, the next most highly ranked teams in the committee rankings are guaranteed a place in the New Year’s Six bowls. Moreover, the committee picks the match ups for these games. Mandel has some examples of how this works in the book.

Let’s stop to appreciate this change. The teams that participate in the Fiesta and Cotton bowls this season are no longer selected through back door deals between bowl people and athletic departments or conventional wisdom about which teams “travel.” These bowl games now depend on merit as assigned by the selection committee.

The take home message is that the committee’s rankings matter beyond the top 4. A team like Michigan State at 8th in the committee rankings has a lot on the line as they watch others play this championship weekend.

Mandel has a great chapter on the selection committee in which he provides a bio on each member. He also reminds us that the committee has the stated goal of picking the four best teams for the playoff.

Now that we’ve seen the committee’s rankings for six weeks, that statement is laughable. The committee has sided with the four most deserving teams, and there’s a big difference between best and most deserving. Let me explain.

Most fans will agree that the most deserving teams have the best record. Football is a game of wins and losses. Those that win should advance. That’s why we begged for a playoff in the first place.

My research shows that the team with the better win percentage wins only 50.4% of bowl games since 2005, a sample of 300 games. You could get the same accuracy in predicting bowl games by flipping a coin.

Florida State shows that committee is not picking the four best teams. The Seminoles have struggled this season, allowing weaker opponents such as Boston College and Florida to stay in games. They have won their games on average by 12.6 points, 20th best in the nation.

The committee has some grasp of the importance of margin of victory. They have Florida State ranked 4th behind 3 teams with one loss.

However, Florida State is one of the four most deserving teams since they have not lost this season. And I believe this is the right thing to do. But the committee should stop saying they’re picking the four best teams.

You might have heard about the insane amount of money that ESPN is paying to broadcast these games ($608 million per year). However, Mandel discusses other interesting aspects of the finances.

Check out the book

You don’t need to search the internet for all the facts about college football’s new postseason. You also don’t need to bore yourself to tears with its Wikipedia page.

In his book The Thinking Fan’s Guide to the College Football Playoff, Stewart Mandel provides much needed perspective on college football’s new system. It’s a quick read, and you’ll know just what’s going on this Sunday when the committee announces the four most deserving teams.