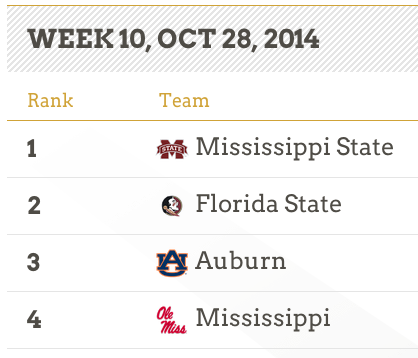 On the surface, things look fine for Florida State. They have beaten Clemson (without Winston) and Notre Dame on the way to an undefeated record. As the visual shows, the college football playoff committee ranked them 2nd in their first rankings.

However, numbers reveal another side of Florida State. Computer rankings that take margin of victory in games and adjust for strength of schedule aren’t impressed. For example, both my team rankings and the Sagarin predictor rank Florida State 20th.

Florida State doesn’t look better when we dig deeper into the numbers.

And the Seminoles face a stern test against Louisville tonight.

Jameis Winston and the Florida State offense have been great this season, ranking 7th in my adjusted yards per play. This unit led the comeback over North Carolina State from a 17 point deficit to win that game.

However, they face Louisville’s 3rd ranked defense. This is an incredible performance for a unit that lost 3 of 4 defensive line starters from last season.

Moreover, Florida State has struggled with pass protection this season. Defenses have sacked the QB on 5.8% of pass attempts, right near the 6% average. Louisville’s defense has generated sacks on 9.3% of pass attempts. Expect a long night for Winston.

Remember how Winston and the offense saved Florida State’s ass against North Carolina State? How does a team get 17 points down to an ACC door mat?

Well, the defense doesn’t stink. They rank 34th in my adjusted yards per play. Some teams would kill for a defense that good. However, a rank of 34th means severe regression for a Florida State defense that finished the last 2 seasons in the top 5.

The pass rush has been a problem. Florida State has sacked the QB on 4.2% of pass attempts. Notre Dame’s Everett Golson had ample time to look downfield against the Seminole’s defense.

However, Louisville’s offense hasn’t been great this season. They rank 69th by my adjusted yards per play, and QB Will Garnder has completed 57% of his passes, a steep decline from the 70% Teddy Bridgewater put up last 2 seasons. The offensive line hasn’t helped Gardner much, as Louisville has allowed sacks on 9.1% of pass attempts.

Louisville did get receiver DeVante Parker back from injury against North Carolina State. The preseason All-ACC receiver caught 9 passes for 134 yards in his only game of the season.

Prediction for Florida State at Louisville

Florida State has the edge in this game because their defense is better than Louisville’s offense. The Power Rank’s ensemble predictions give Florida State a 1.5 point edge.

However, if Louisville QB Will Gardner gets some time to throw to DeVante Parker, they might put up enough points to pull the upset. My numbers give them a 45.5% chance to win.

The markets also see the strength in Louisville. The opening line of Florida State by 7 moved to 3.5 by this afternoon.

These predictions are a collaboration with Mike Craig, my partner in the prediction service. We use rankings based on margin of victory and yards per play as well as data from the markets to compute the spread and total in every game.

In this sample of predictions, the first number is a point spread in which a negative number predicts a victory for the home team. The second number is the total points scored by both teams.

All of these math predictions are available to members.