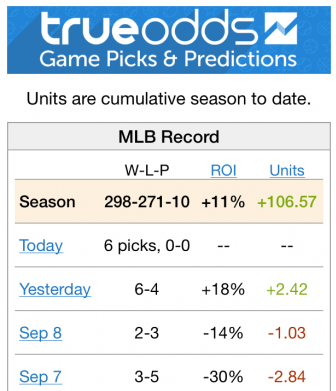 Do you bet on baseball? Are you looking for an extra edge based on data and analytics?

Onside Sports has new solution. While they launched as a social sports app last year, they have now developed True Odds, a data driven prediction system for baseball. True Odds, an in-app purchase, has a 298-271-10 record this season through September 9th.

I had the opportunity to talk with Kai Yu, the brains behind True Odds. While he obviously could not tell me everything about his methods, he did share quite a bit, which I’ll share in this post.

If you’re eager to get a free trial of their picks, click here and use the code THEPOWERRANK.

Baseball from its fundamental interaction

True Odds starts with the matchup between pitcher and batter. Based on historical data, it seeks to estimate probability of an event such as Miguel Cabrera’s hitting a home run off James Shields.

As part of this analysis, Kai had to carefully sort out which variables predict the future and which variables tend towards randomness. He noted contact rate as an import skill for a hitter. It’s tough to strike out Victor Martinez no matter who pitches to him.

This bottom up approach has advantages over the top down approach that looks at overall team performance. Often times, this top down approaches looks at a team’s runs scored and allowed. However, these numbers can be greatly affect by the sequencing of hits, or cluster luck. Combining pitcher batter matchups with the simulation method below does not have these problems.

Based on the probabilities from every pitcher batter matchup, True Odds uses a random simulation to play the game many times. Each simulation is different, and a set of simulations gives the probability that certain events happen, such as a Detroit win over San Francisco or a total of more than 7 runs for Oakland and Seattle.

To accurately simulate a game, True Odds must know both the pitcher and the opposing line up. This method naturally accounts for injuries.

Other quants have also used pitcher batter matchups and random simulations to profit on baseball. For example, check out this excellent Q&A with David Frohardt-Lane on Regressing, Deadspin’s sports data blog.

A multitude of other factors

Kai also stressed the importance of other factors, such as park, weather and umpires. True Odds incorporates these factors in predicting the outcomes of games.

Let’s discuss umpires, who can impact home field advantage. As Jon Wertheim and Tobias Moskovitz discussed in their book Scorecasting, umpires tend to call more strikes on road than home batters. This tendency increases in high leverage situations, such as two outs with the bases loaded in a close game in the bottom of the ninth.

However, umpires might not play as big a role in home advantage anymore. Through September 8th, home teams have scored a mere 49 more runs than road teams. This 0.02 runs per game is much lower than the historical average.

Major League Baseball might be keeping a more watchful eye on umpires with cameras. I bet True Odds has a grasp on this.

Does FIP apply to every pitcher?

The most interesting part of my conversation with Kai concerned whether fielding independent pitching applied to every pitcher.

To recap, fielding independent pitching comes from the research of Voros McCracken, who discovered that pitchers do not affect batting average on balls in play (BABIP). Pitchers have control over their strike outs, walks and home runs allowed. However, 30% of balls hit in play become hits, and deviations from this average for a pitcher strongly regress to the mean.

This research led to the development of FIP, a runs allowed statistic that only considers strike outs, walks and home runs. It should replace ERA in any discussion of pitching performance.

However, Kai suggested FIP doesn’t apply to all pitchers. He cited Seattle’s Chris Young as a pitcher who consistently has a lower ERA than FIP. This reminds me of an excellent analysis of Mark Buehrle and how his defense makes him a better pitcher than FIP suggests.

Try out True Odds for free

Onside Sports has done a remarkable job using data to find value in the baseball market. Their predictions have registered 298 wins, 271 losses and 10 pushes for a return on investment of 11% through September 9.

As a reader of The Power Rank, you can try out True Odds for free. Follow the steps under this video and use the code THEPOWERRANK. With only 4 weeks left before the baseball postseason, check it out today.