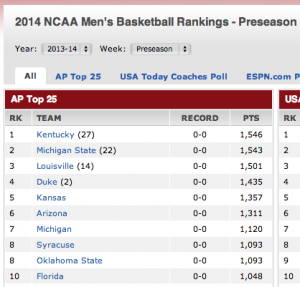 Kentucky started the season #1 in the preseason AP poll in 2013.

Then John Calipari’s young Wildcats struggled during the season, losing 10 games along the way. They dropped out of the AP poll entirely by the end of the season.

However, Kentucky found their stride in the tournament. As an 8 seed, they beat Louisville and Michigan in the regional final to advance to the Final Four.

Could we have learned something from the preseason AP poll? Can the opinion of sports writers months ago tell us something about post season play?

Quite surprisingly, the answer is yes. Research shows that the higher ranked team in the preseason AP college basketball poll wins 72% of tournament winners, the same win percentage as the team with the higher seed in the bracket.

The aggregate opinion of sports writers does a good job evaluating the potential of each team. Kentucky is a prime example, as Calipari brought in one of the most highly touted recruiting classes ever.

What about college football?

My own research shows the same predictive power for the preseason AP football poll.

The preseason AP college football predicted 59.8% of bowl game winners (125 of 209). The poll made a prediction in 79% of these games. Remember, this poll comes out before any college football games have been played.

To put this accuracy in perspective, let’s compare it with the Colley Matrix, one of the computer polls in the old BCS system. Given the game results of all college football games before bowl season, the Colley Matrix predicts the winner of 55.1% of bowl games (146 of 265).

During the season, the AP poll loses its predictive power because it reacts to strongly to wins and losses. The higher ranked team in the poll just before bowl season wins 57% of bowl games (106 of 186). This poll makes a prediction in 70.1% of bowl games (186 of 265).

I presume the AP college basketball poll also loses its predictive power as the season progresses.

With only hundreds of games, the uncertainty in these win percentages is about 3%. This implies a 2 in 3 chance the actual accuracy of the Colley Matrix is between 52% and 58%. So while we can’t say with certainty that the preseason AP college football poll is more accurate than the Colley Matrix, it does seem likely.

Will Kentucky beat Wisconsin in the Final Four?

Kentucky excels in two areas: offensive rebounding and getting to the line. Julius Randle, the best college basketball player not named Jabari Parker, leads this attack. He is a physical presence with soft hands to finish around the basketball.

However, Kentucky does not shoot the ball well. They shoot 33% from 3 point range, worse than the Division I average. However, Kentucky has found a hot streak in the tourney, going 8-18 against Wichita State and 7-11 against Michigan. Can this continue?

Wisconsin has the 4th best offense by my points per possession adjusted for strength of schedule. Seven foot center Frank Kaminsky has been a beast the entire tourney. He has hit 3 point shots as well as scored around the basket. As a team, Wisconsin shoots 38% from 3.

However, I’m concerned about their point guard play. Traevon Jackson wanted to be the hero against Arizona. On 3 possessions down the stretch, he ran a pick and roll with Kaminsky and then ignored his dominant center in the post against a guard. Sheer stupidity.

My teams rankings, which do not consider the preseason AP poll, predict a Wisconsin win by 1.8 points. This implies a 55% win probability over Kentucky.