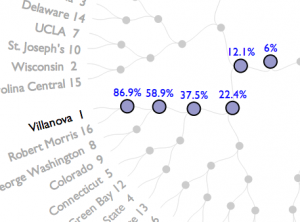 It will happen. Maybe not this year, maybe not next year, but a 1 seed will fall to a 16 seed.

Just look at the last two seasons. Syracuse needed help from the referees two seasons ago to escape UNC Asheville. Southern took Gonzaga down to the wire before Kevin Pangos hit some shots to put the game away.

Numbers also support the claim that a 1 seed will topple in their first game. Let me explain.

Based on CBS’s bracket projection, I used my college basketball rankings to calculate the win probabilities for each team. This interactive bracket displays these 416 numbers, which include the chance that each team advances through each round.

Clearly, this bracket is more useful after Selection Sunday, a short 10 days from now. However, let’s look at the likelihood that any of the 4 one seeds go down.

The numbers behind the 1 vs 16 matchup

My win probabilities imply a 34.7% chance for 16 seed to beat a 1 seed in the CBS bracket projection.

This chance is too high. My win probabilities for games with big point spreads tend to favor the underdog too much. For example, Florida Gulf Coast has a 8.7% chance to upset Arizona. It’s probably more like 4% (there is no math behind this number).

However, consider the hypothetical world in which each 1 seed had a 99% chance to win over a 16 seed. The next 10 tourneys will feature 40 such games. To determine the chance that all 40 top seeds win, you take 0.99, multiple by 0.99, and do this another 38 times to account for all 40 games.

I have a long standing bet with a friend over this. We bet a six pack of beer over whether a 1 seed would lose to a 16 seed over the next ten years. (Neither of us remember when we made this bet, so the 10 years end after I win.)

Based on the 33.1% chance above, you may think I got the bad end of the deal. However, most 16 seeds have a much better than 1% chance to pull the upset. Even if you assume a 2% win probability, my chance of winning over the 10 year period goes up to 55%.

Can this be the year?

The CBS bracket pits 1 seed Villanova against 16 seed Robert Morris, a game that should excite any fan that lives all year for the upsets of the first 2 days of the tourney.

Villanova is overrated as a 1 seed, as my team rankings place them 8th. Moreover, they shoot 3 point shots on 46% of field goal attempts, 6th most in the nation. Live by the 3, die by the 3.

In addition, Robert Morris shoots 39% from 3 point range. If they get hot while Villanova goes cold, I could be collecting my six pack.

Of course, it’s too early to get excited with this mock bracket. Villanova could drop from a 1 seed if they lose early in the Big East tournament. Robert Morris must win their conference tournament to even make the field.

The likelihood of a 16 seed upset is higher if the best teams in the lower ranked conferences win their tournament. For example, if a team like Savannah State, ranked 294th, wins the Mid-Eastern conference tourney, then they would be a 16 seed in the tourney. A team that my numbers consider 7.5 points worse than average will not help my chances of a 1 seed upset.

But one of these years, a 16 seed will beat a 1 seed. You heard it here first.