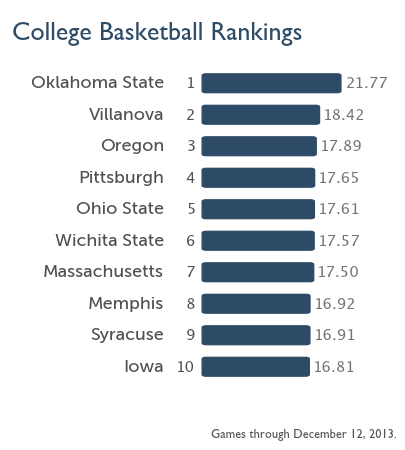 After a month of college basketball, my teams rankings look strange.

Oklahoma State tops a motley crew of teams you wouldn’t expect in the top 10. Syracuse is the only traditional power on this list, sneaking in at 9th. Pittsburgh (4th) and Ohio State (5th) have had some good teams over the last decade. Otherwise, The Power Rank’s top 10 contains some surprise teams.

Before we discuss 3 of these teams in detail, consider teams not on this list.

Small sample size plays a critical factor in these early season rankings. With more games, some traditional powers will rise while some upstarts will fall.

We’ll look at 3 surprise teams in more detail. In this post, the offense and defense rankings are a team’s points per possession adjusted for strength of schedule.

In addition, I also adjust Dean Oliver’s 4 factors for schedule strength, a critical factor so early in the college basketball season. Comments on each team reflect these numbers. For example, a team shoots well when they have a good 2 points shooting percentage after schedule adjustments.

Interested in all of this data? Members of The Power Rank have access to all of it, including daily data files that can be uploaded into a spreadsheet. I’m making a special offer for fans on my email list next week. To sign up for this free email newsletter, enter your email address and click “Sign up now”.

When I watch an Oklahoma State game, I feel old. Back before I knew any of the math used to rank teams on this site, I watched Travis Ford play at Kentucky in the early 90’s.

Now, he coaches the clear number one team in The Power Rank. Led by guard Marcus Smart, they rank 2nd in offense. The Cowboys shoot well and don’t commit turnovers. Behind Smart, they have 4 other players averaging 10 points a game.

Oklahoma State also has a sound defense, ranked 21st in the nation. They excel in holding opponents to poor shooting and forcing turnovers.

Oklahoma State will most likely regress from their lofty rank. Their 3 point shooting has improved from 32% last season to 41% this season. Most of this improvement has come from Phil Forte, who has sunk 53% of 3’s this season. Unless he can keep this up, Oklahoma State’s offense will not end the year 2nd in the nation.

The Minutemen are lead by coach Derek Kellogg, a former assistant and recruiter for John Calipari. After finishing last season 88th in The Power Rank, they have surged to 7th this season.

Led by guard Chaz Williams, Massachusetts has the 18th best offense in the nation. They shoot well and get on the offensive glass. Moreover, they also have 5 players averaging over 10 points a game.

UMass also plays stingy defense, ranked 35th in the country. They excel in making opponents shoot poorly and not fouling.

Of the three teams profiled here, Massachusetts is mostly likely to stay high in The Power Rank. Their success so far hasn’t come from exceptional 3 point shooting or 3 point defense, two numbers that strongly regress to the mean.

I had my doubts when Oregon fired coach Ernie Kent in 2010. Kent had the most wins in school history and led Oregon two Elite Eight appearances.

After a failed attempt to lure Tom Izzo to the Pacific Northwest, Oregon hired Dana Altman. Despite his success at Creighton, I had my doubts whether he could live up to super booster Phil Knight’s lofty expectations.

However, Oregon has risen from 31st at the end of last season to 3rd this season in The Power Rank. They excel on offense, ranked 3rd, but have some work to do on defense, ranked 110th.

Which direction the Ducks head depends on two factors.

Oregon has shot incredibly well from 3 point range. They have sunk 44% of 3 pointers, a much higher rate then the 33% they shot last season. The randomness of 3 points shooting suggests they can’t sustain 44% for the season.

However, Oregon has missed two key players, Dominc Artis and Ben Carter, so far this season. They were suspended for selling team issued apparel. If they return and show more brains on the court than off, Oregon could be a top 10 team.