Before we dive into the SEC title game, the most intriguing game of championship weekend, let’s take a quick look at a few other games.

Check out my Google+ post on Stanford at Arizona State in the Pac-12 title game.

Does Duke have a chance against Florida State?

No. Well, it’s quite unlikely.

From both my calculations and the Vegas odds, Florida State has a greater than 90% chance to win this game. Duke throws the ball well, ranking 30th in yards per pass attempt adjusted for schedule. But that’s about it.

The Big Ten title game’s most intriguing match up is Ohio State’s rush offense against Michigan State’s rush defense. The Buckeyes rack up 7.4 yards per carry, by far the best in the nation. You don’t need schedule adjustments to claim they run the ball better than anyone, even Auburn.

However, Michigan State only allows 3.0 yards per carry, by far the best in the nation. This strength on strength match up will determine the outcome of the game.

The Power Rank’s team rankings predict a 4 point win for Ohio State while yards per play gives an 8 point win. This suggests the line that favors Ohio State by 5.5 is about right. The Buckeyes have about a 60% chance to remain undefeated.

Auburn is a traditional powerhouse

Before discussing the match ups in Saturday’s game between Auburn and Missouri, let’s look at the history of these teams.

For each of the last 30 years, the team history visual shows both wins and rating, which gives The Power Rank’s calculation of an expected margin of victory against an average team. 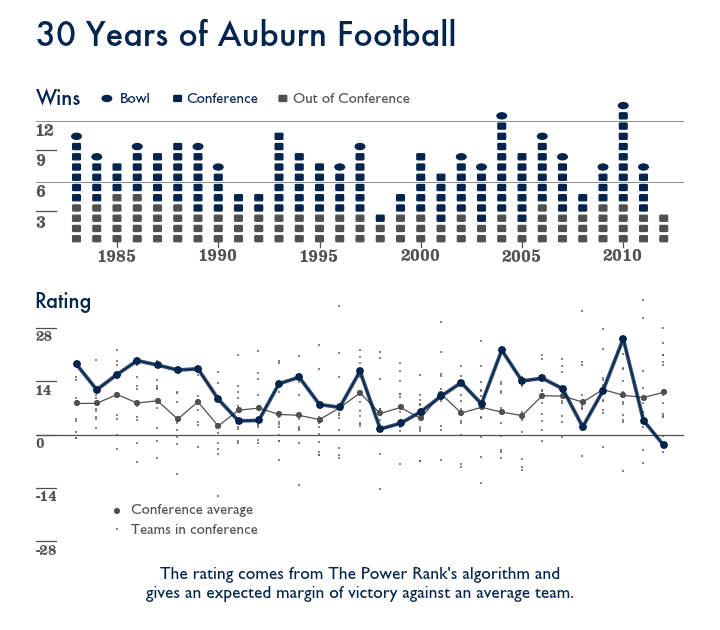 Auburn has been mostly successful over the last 30 years. This started with coach Pat Dye, who recently made headlines through his ignorant comments about Condoleeza Rice. He passed the torch to Terry Bowden in 1993, who did quite well before his team imploded in 1998. Tommy Tuberville took over in 1999 and peaked in 2004, the year an undefeated Auburn was not chosen to play in the national title game.

Gene Chizik became head coach in 2009. Behind stellar junior college transfers Cam Newton and Nick Fairley, Auburn won the national title in 2010. Then the wheels fell off the following two years. 2012 was the only year of the last 30 in which Auburn did not rate as a better than average team.

Guz Malzahn came back this season and has worked miracles. Most of us remember Auburn’s stunning kick return to beat Alabama in the final seconds of the Iron Bowl last weekend. But this event was much more likely than the deflected hail mary that miraculously fell into the hands of an Auburn receiver to beat Georgia.

Despite this luck, Auburn is a very good football team. They rank 11th in my team rankings with a rating of 18.2.

Missouri does not have the same tradition as Auburn. 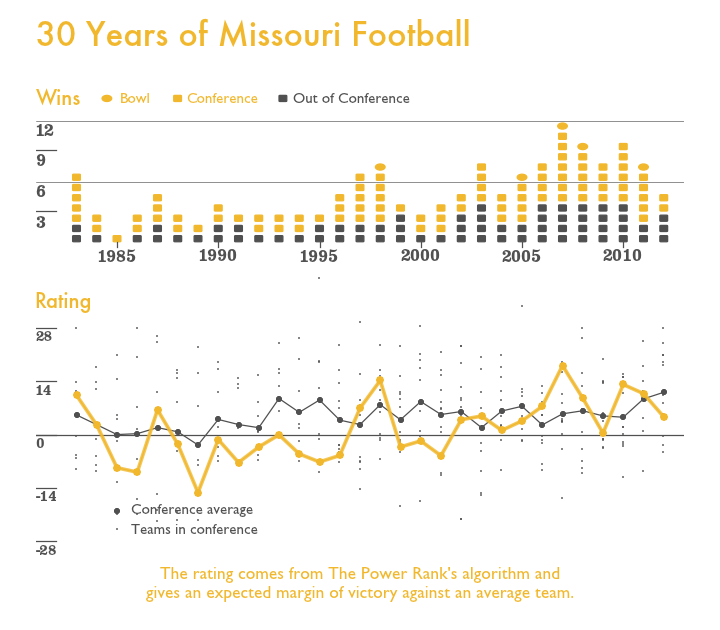 Except for two good seasons in 1997 and 1998, the Tigers did not emerge as a consistently good team until Gary Pinkel took over as coach in 2001. Missouri went 12-2 and won the Cotton Bowl over Arkansas in 2007. That was their highest rated team until this season.

Ranked 4th in The Power Rank, Missouri is more than 3 touchdowns better than the average FBS team this season. The media continues to talk about whether Auburn or Ohio State should play in the national title game as if the Auburn has already won the SEC. Their rich tradition probably has a lot to do with that. However, Missouri should be the favorite in Atlanta.

By my offense and defense rankings by yards per play, Missouri has an edge on offense. They rank 11th in the nation behind QB James Franklin and RB Henry Josey. Auburn’s defense has been near average (55th) this season.

However, Auburn has a potent offense, ranking 9th in the nation. They primarily run the ball with QB Nick Marshall and RB Tre Mason. Auburn’s rush attack ranks 3rd in yards per carry adjusted for strength of schedule.

And rush defense happens to be Missouri’s only “weakness”. This match up visual, in which better defenses appear further to the right to facilitate comparisons, shows the adjusted statistics for Missouri’s offense against Auburn’s defense. 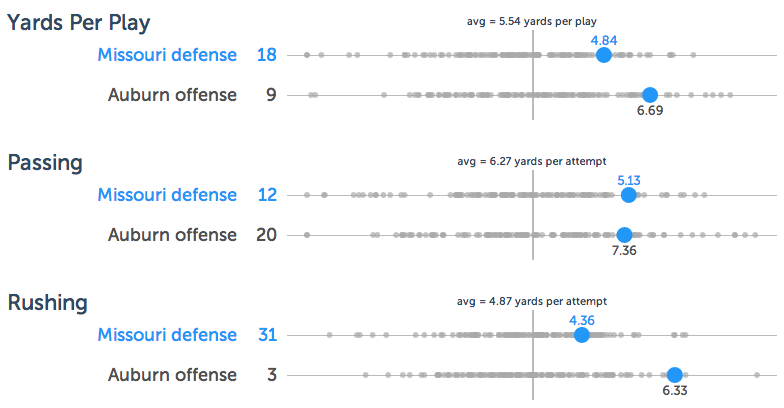 Better defenses appear further to the right to facilitate comparisons.

Members of The Power Rank have access to interactive versions of these visualizations for all 125 college football teams. To learn more, click here.

While my team rankings predict a 3 point win for Missouri, yards per play gives an even larger margin (6) for Missouri. The Vegas line seems to agree. It opened favoring Auburn by 3 but has since shifted to 1.5. It should be a close game, with Auburn’s ability to run the ball as the key to the outcome.