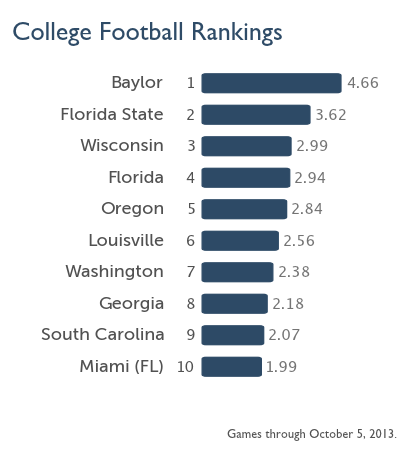 Rankings by yards per play on offense and defense.

The Power Rank started as a method of ranking teams based on the final score of games. Based on research in statistical physics, this algorithm takes a team’s margin of victory and accurately adjusts for strength of schedule.

However, if you want to truly understand football, you have to dig past the final score. Offense, defense and special teams all make contributions to the outcome of the game.

To accurately evaluate the offense and defense, consider yards per play. This statistic captures an offense’s ability to move the ball and the defense’s skill in preventing this movement. I apply the ranking algorithm to yards per play to accurately account for strength of schedule in these numbers.

The national championship game in 2011 season

To see the predictive power of yards per play, let’s go back to the 2011 season. To the chagrin of college football fans outside the South, LSU met Alabama in the national championship game. The team rankings picked a 4 point win for LSU. This seemed reasonable given LSU’s 3 point win at Alabama during the regular season.

Why were the team rankings off? Turnovers.

LSU had a +20 turnover margin during the 2011 season. This included a critical interception against Alabama in their regular season contest that prevented an Alabama score.

Turnovers tend to be random, as a team’s turnover margin has no power in predicting future turnovers. But these high impact events can greatly impact the final score, as seen in the regular season content with LSU and Alabama.

However, turnovers have almost no impact on yards per play, which makes it a useful metric for evaluating teams.

Let’s look at what yards per play says about 3 games this weekend.

LSU’s insanely difficult schedule continues. Out of the opposite division, the Tigers lost to Georgia and face Florida this weekend. In contrast, Alabama draws Tennessee and Kentucky out of the SEC East. There is no better example of the injustice of schedule in college football.

Over the past few seasons, LSU has featured a dominant defense with an offense that comes along for the ride. However, by yards per play adjusted for schedule, the opposite is true this season. The offense ranks 9th, mostly on the new found accuracy of QB Zach Mettenberger. The defense, which lost countless stars to the NFL, checks in at 38th.

Florida has the top ranked defense by yards per play and should slow down LSU’s offense. In addition, QB Tyler Murphy has taken over for the injured Jeff Driskel and completed 72% of his passes. Florida’s offense could be better than the 39th that their season long stats suggest.

Yards per play predicts an 11 point win for Florida on the road. This is quite different from the team rankings (4.6) and line (7) which predicted an LSU victory.

Saying Georgia State is a bad football team is like saying Erin Andrew is pretty. It does not justice to how truly awful this team has been in its first year as an FBS school. The Panthers are 0-5 with 3 losses to FCS schools in this transitional year.

Sun Belt rival Troy travels to Atlanta to play Georgia State this weekend. Larry Blakeney has coached this team for the last 22 years, an incredible tenure in this age of “what have you done for me lately”. Only a good coach could last this long. Let’s call an easy win for Troy.

Georgia State is an 18 point underdog. This suggests Troy is 21 points better than the Panthers. However, the team rankings that use games from last season predict only a 12 point win for the road team Troy.

Moreover, Georgia State looks even better by yards per play. Troy’s defense has been awful, ranking 117th out of 125 teams. Georgia State will not scare anyone with their 95th ranked offense, but it looks like a good match up for the Panthers.

Even though Troy has the advantage on the other side of the ball, yards per play predicts a 5 point win for Georgia State. While there is certainly noise in such an early season prediction, it’s too big a difference from the line and the team prediction to ignore.

I almost didn’t post the analysis for this game. If you predict a team that went 1-11 as an FCS team last season will cover and they lose by 50, you look like an ass. However, my numbers get better each week. Moreover, Troy gave up 7.59 yards per play (5.54 FBS average) to South Alabama in a narrow 1 point win last week.

So I’m going with Georgia State.

The Red River Rivalry in Dallas has some interesting story lines this week.

Texas has been terrible this season, and coach Mack Brown might lose his job and the over $5 million per season that comes with it. They have won the past two weekends against Kansas State and Iowa State, but required a bit of luck in both games. More on that soon.

Oklahoma finished last season 15th in my team rankings and had their lowest rating since 2005. Questions about the talent of the defensive line continue to surface for the Sooners.

However, Oklahoma is in much better shape than Texas. Oklahoma features the 29th best offense and should up points against the 79th ranked defense of Texas.

On defense, Oklahoma features the 29th best pass defense but only the 103rd ranked rush defense. Texas has been average in both passing and rushing so far this season. This implies they might be able to run the ball, which could be a problem for Oklahoma if Texas takes a lead. However, if Texas falls behind, they’ll find it hard to throw the ball, particularly with QB Case McCoy taking over for David Ash.

Overall, yards per points implies a 10 point win for Oklahoma. This number should probably be larger, since Texas scored on a hail mary against Iowa State, a play that depends more on luck than skill. This pushes the prediction closer to the line of 14.

Yards per play is a powerful way to evaluate teams. However, it is far from perfect. It does not account for special teams, and turnovers can still impact the game.

When I say yards per play predicts a 10 point win for Oklahoma, it implies an expected point spread given equal impact of turnovers and special teams for both teams.

Members of The Power Rank have access to all my adjusted numbers and predictions. To learn more, click here.