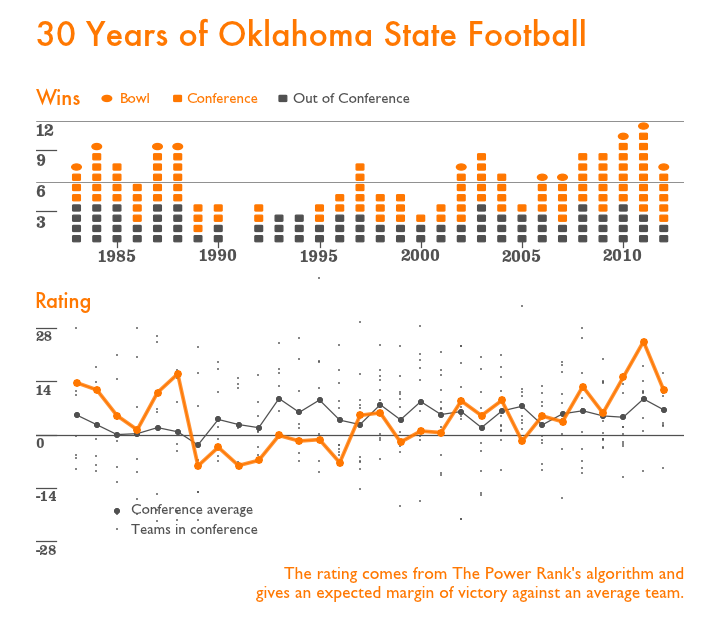 Sports Illustrated dropped a bomb on Oklahoma State and college football this week. A report revealed a massive number of NCAA violations, including paying players and academic fraud.

The payment of players started in 2001 when Les Miles became head coach. With data visualization, we can look at how team performance changed after this started.

The top panel shows wins over the last 30 years. Oklahoma State struggled in the 1990’s, even managing a winless season in 1991.

The Cowboys started to win more after 2001. In fact, they have won at least 6 games in each year of the past decade, with Mike Gundy’s first year in 2005 as the only expection.

The bottom panels shows the team rating from The Power Rank algorithm. This rating gives an expected margin of victory against an average FBS team.

If you’re not sure what to think about a computer rating, consider the predictive power of The Power Rank. In pre bowl rankings, the higher ranked team has won 66.8% of bowl games since 2005. In comparison, the opening line in Vegas has correctly predicted 59.8% of bowl game winners over the same period (data from The Prediction Tracker).

The rating also shows improvement in Oklahoma State football since 2001. They became an above average Big 12 team during the tenure of Les Miles. However, it took time to become an elite program. In 2011, they beat Stanford in the Fiesta Bowl and finished 3rd in the rankings behind Alabama and LSU. This came ten years after the alleged payments to players started.

Two things stand out about this Sports Illustrated report.

No denials of the allegations

If athletic director Mike Holder knew nothing about paying players, I would expect him to deny the allegations in the report. Instead, Holder apologized to other member institutions of the Big 12.

Even Oklahoma State super booster T. Boone Pickens didn’t deny the allegations. Within 24 hours of SI’s story, Pickens released this well shot and edited video. He only criticized SI for not looking at the state of the program today.

No accusations against the super booster

T. Boone Pickens is well know for his generosity to Oklahoma State football. In December of 2005, he gave $165 million towards renovating the stadium, now know as Boone Pickens Stadium.

However, Sports Illustrated does not allege that Pickens participated in any of the payment to players.

It’s hard to say with certainty that the payments to players caused the rise in Oklahoma State’s football program. However, visualizing the data certainly shows a rise in their program after 2001 when these payments started.