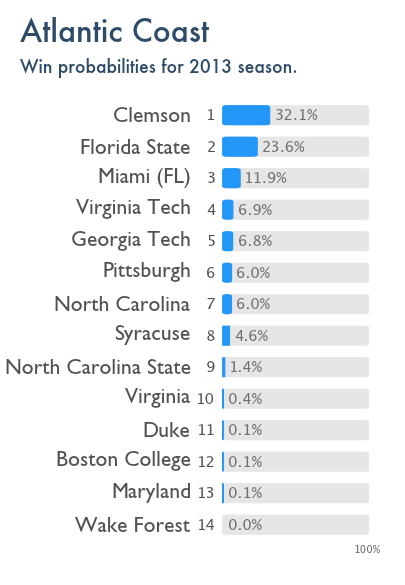 Note from Ed: This is another guest post from Chad Peltier, who penned an awesome SEC preview previously. While the conference win probabilities have changed after week 1, I decided to keep the preseason odds.

The Coastal Division is highly unbalanced with both Clemson and FSU at the top. The Atlantic Division has a wider distribution of power between Miami, Virginia Tech, Georgia Tech, UNC, and Pitt.

The division races are far from certain this season, especially with upstarts in Maryland, Syracuse, and UNC.

It’s unfortunate that the two best teams in the conference, Florida State and Clemson, are both in the Atlantic Division. One very good team will not make the ACC title game. Florida State has a strong case to be that top team and Atlantic Division representative even with starting a redshirt freshman quarterback in Jameis Winston. Seminole fans have to be excited after glimpsing Winston’s first game and his 93% completion percentage.

With a deep defense buoyed by successive top recruiting classes (particularly in the secondary), Jimbo Fisher will likely be most concerned with his offense in 2013. Winston, a former five-star recruit, is as close to a sure thing as possible. However, the offensive line and receiving core are two possible areas of weakness. The Seminoles are talented in the secondary, at running back, and at linebacker, but match-ups with Clemson and Florida might be tough for this developing team in 2013.

With these match-ups in mind, Florida State is the second-most likely team to win the conference at 23.6%, as well as to win the Atlantic Division, at 36.8%.

Once again, Clemson looks to be the class of the conference in 2013. Senior QB Tajh Boyd leads a formidable pass oriented offense that unfortunately lost its top WR DeAndre Hopkins and top RB Andre Ellington.

Many Clemson fans feel comfortable with a receiving core of Sammy Watkins and Charone Peake, and Boyd showed in the Georgia game that he feels comfortable spreading the ball to the large group of receivers. One revelation was senior RB Roderick McDowell, who ran for 132 yards against Georgia’s defense. Offensive coordinator Chad Morris is hoping to run as many plays as possible – hitting 100 during the bowl game with LSU – so what the Tigers may lack in efficiency they can more than make up for in sheer volume of plays.

The greater concern for Clemson may be their defense, especially the back seven. While effective against the run, the Tigers had a penchant for giving up big plays in both the passing game and after running backs hit the second level. This was evident against Georgia, as even an injured Todd Gurley was able to break long runs throughout the night.

Regardless, Clemson faithful have plenty of reasons to be optimistic following their win over Georgia. As it stands now, Clemson remains the most likely conference champion at 32.1% and a 48.1% chance of winning the Atlantic Division.

NC State had a perfectly mediocre 7-6 campaign in 2012, thank-you-very-much. The Wolfpack are without possible Buccaneer starter Mike Glennon at quarterback, but will rely on an experienced (if not overly talented) defensive front seven to keep them in games in 2013.

While the front seven should at least be solid, the inexperienced secondary will likely give up explosive plays to the better quarterbacks in the conference, including Stephen Morris, Logan Thomas, and Bryn Retter.

As a result of the inexperienced secondary and the questions on offense – especially quarterback – the Wolfpack are just the fourth best in the Atlantic Division (behind Syracuse) with a 4% chance to win the division and just a 1.4% shot at the conference title.

Syracuse enters in to a new era with Coach Scott Shafer and new QB (and Oklahoma transfer) Drew Allen. Allen was only decent in a close loss to Penn State, completing less than 50% of his passes for 189 yards.

The secondary limited the defense’s effectiveness in 2012, but intercepted blue chip Penn State quarterback Christian Hackenberg twice. Orange faithful can be pleased with the front seven’s performance against a fairly formidable Nittany Lion run game, which was held to just 57 yards and a 1.5 yard per carry average.

Syracuse certainly won’t be irrelevant in the Atlantic Division and is projected to finish third with a 9.7% chance of winning the division (but just a 4.6% shot at the ACC title).

Boston College, Maryland, and Wake Forest all make up the cellar of the stratified Atlantic Division. Combining for just a .2% shot at the ACC and 1.2% chance to represent the Atlantic Division, things are still fairly grim for these three ACC teams. While all three won their opening day games, they came against the likes of Presbyterian, Villanova, and Florida International.

Maryland might have found a winning combination with Deon Long and Stefon Diggs, a wide receiver tandem that could star at almost any school in the country. QB C.J. Brown had a fantastic start after tearing his ACL last season, completing 20 of 23 passes and not throwing an interception on the day.

Wake will move towards a more running-based team this season, with QB Tanner Price tasked with more rushes and option football than in his previous years with the program.

Boston College was unable to rush the ball with any success in 2012 and is hoping senior QB Chase Rettig will have more help from his running backs this season.

Of the three, look for Maryland to make the most noise this season, with the potential to upset better teams due to its group of skill players.

Virginia Tech has been on a slide since its excellent 2009 and 2010 campaigns, resulting in an underwhelming 7-6 2012 season. A large part of the problem was that the 2012 offense failed to find an identity under hyped junior quarterback Logan Thomas. Thomas has elite size for a quarterback (as a former tight end), but struggled with accuracy (16 interceptions), sacks, and interceptions. New offensive coordinator and QB guru Scott Loeffler comes to Blacksburg after an extremely disappointing year at Auburn, but many question whether the passing game will improve in 2013.

Despite the offensive woes, it’s certainly not all bad news for Hokie fans. The defense might become an elite unit with a senior-laden line and a young, athletic secondary. Though the Hokies lost to Alabama in the opener, the defense managed to hold the Tide to two offensive scores and A.J. McCarron to a 43% completion percentage.

Led by the defense, the Hokies are a distant fourth to win the conference at 6.9% and second in the Coastal Division at 20%.

Larry Fedora has done an admirable job bringing some measure of respect to the basketball-first school, though the Tarheels will be without their do-everything running back Giovani Bernard. Bernard averaged 6.7 yards per carry for over 1200 yards and almost 500 receiving yards, making him a step better than any other back on the Tarheel’s roster.

QB Bryn Renner was remarkably efficient last season, throwing for 3,300 yards on just seven interceptions, and should carry the fast-paced offense with a deep group of receivers. The concern might be in how well Fedora’s 4-2-5 defense holds up against the spread offenses in the ACC.

With early tough matchups with Miami, Virginia Tech, and Georgia Tech, the Tarheels have a 17% chance of winning the Coastal Division and a 6% shot at the ACC crown.

Tech has been consistently great on offense and mediocre to poor on defense since Paul Johnson began his tenure. That trend looks like it will continue for another season. Tech returns a load of quality running backs to play in the flexbone offense, as well as a more experienced QB Vad Lee and offensive line. Lee was solid against Elon, going 7/11 for 189 yards in 70-0 rout.

After a terrible defensive season under Al Groh, the Jackets hired Ted Roof to install a 4-3 defense, which Tech’s personnel is far more suited for. Elon really never stood a chance, but the Tech defense should get a better test against Duke and North Carolina in the next two weeks.

The Coastal Division has a more rough balance of power than the Atlantic Division, and Pitt’s entrance into the ACC only underscores that parity. The offensive cast is completely new, with running backs Ray Graham and Rushel Shell are both no longer with the team, quarterback Tino Sunseri has graduated, and the second and third best receivers have graduated as well. There isn’t too much room for optimism over the offense in Paul Chryst’s second season, despite an excellent first quarter against Florida State.

Pitt currently is the fifth-most likely Coastal Division representative, but at 15.7%, isn’t far behind UNC or Georgia Tech. Pitt has just a 6% chance of winning the ACC overall.

Despite the looming NCAA investigation, Miami generated a lot of hype behind the stellar late season play from QB Stephen Morris and freshman running back Duke Johnson. Johnson in particular lived up to his recruiting hype as an electric kick returner and pounding running back, despite being no taller than 5-9. The Miami offensive line is one of the most veteran units in the country and shouldn’t have too much trouble opening holes for Duke or protecting Morris.

However, the defense has an inexperienced secondary and might struggle with more dynamic offenses like UNC, Georgia Tech, and Florida State. Nonetheless, Miami’s offense should put them at the front of the pack in the Coastal Division, with a 27.5% chance to take the Coastal Division and a 11.9% chance to win the ACC (which is third behind Atlantic Division probables Clemson and Florida State).

Duke and Virginia have just a .5% chance of winning the ACC (and a 2.7% shot at the Coastal title), but should both be better than the Atlantic cellar-dwellers Boston College, Maryland, and Wake Forest.

Duke returns a surprisingly deep cast of running backs, while also adding freshman four-star recruit Shaw Powell to run behind the veteran offensive line. The ground game won’t be the problem for the Blue Devils in their quest for bowl eligibility – that will likely be the passing game, which lost its quarterback and top wide receiver to graduation. Duke took the first step towards 6 wins in week one, beating NC Central 45-0.

Virginia’s 4-8 2012 campaign was disappointing after a promising series of recruiting classes and a decent 2011 season. This year’s offense will look much different after the graduation and transfer of the top two QBs. The Cavs managed to beat a decent BYU defense without many offensive fireworks, but should begin to work freshman five-star recruit Taquan “Smoke” Mizzell in at running back.