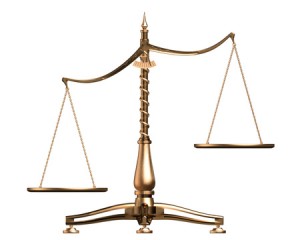 College football has a short season. Eight or nine games determine whether your teams wins its division or conference.

This conference schedule used to include all other teams in the conference, a round robin format. Then SEC commissioner Roy Kramer added Arkansas and South Carolina so his 12 team conference could hold a championship game. The Big Ten added Penn State to grow to 11 teams.

When conferences get bigger and separate into divisions, your team can no longer play every other team in the conference. While each team plays a round robin in its division, the cross division schedule can vary greatly.

For example, consider the Big Ten Legends division. Michigan plays Ohio State, a national title contender for most people, Penn State and Indiana from the other division. Michigan State plays Indiana, Purdue and Illinois, arguably the worst 3 teams in the conference.

The schedule imbalance is worse for LSU in the SEC West, as they face Georgia and Florida, two national championship contenders, from the other division. Alabama faces Tennessee and Kentucky instead.

This imbalance in schedule greatly affects your team’s chance to win its division.

Let’s put some numbers behind this injustice.

How to determine win probabilities for a conference

The game of football is inherently random. A fumble or a tipped pass can flip the results of a game in a single play. It can even derail Nick Saban’s Alabama dynasty for a few weeks, as AJ McCarron thew a goal line interception to seal their loss to Texas A&M last season.

To account for this randomness, I use the Monte Carlo method to simulate the 2013 college football season. This method employs random numbers to sample the many outcomes that can happen during the season.

Monte Carlo is the same technique Ed Thorpe used to test how his black jack strategy would perform in a casino. He did pretty well in those casinos, inspiring a generation of kids like Jeff Ma to win millions in Las Vegas.

How does this work for college football? Suppose Michigan has a 53% chance to beat Nebraska at home this season, as my preseason rankings predict. In a simulation, Michigan wins this game with 53% probability. Just like an actual football game, the simulation takes the uncertainty heading into the game and turns into the certainty of a win or loss. The simulation repeats this random picking of game winners for each game.

Flipping coins is the easy part of simulating the college football season. The computer then calculates the win loss record from the game results to determine the winner of the division. In the case of a tie, this gets complicated. The computer looks at head to head records and division records to determine a champion.

This simulation is repeated many times, and the win probability for a team is the fraction of simulations that it wins its division or conference.

The win probabilities for each game come from my preseason rankings. These are based on a regression model that considers a team’s rating in The Power Rank, turnovers and returning starters.

This is the toughest division in college football. In my preseason rankings, three of the top 5 teams in the nation come from the SEC West. LSU brings up the rear behind Alabama and Texas A&M at 5th in the nation.

The schedule will make life even more difficult for the Tigers this season. Here are the cross division games for the top 3 teams; the first team is a rivalry game played every year.

LSU faces Florida and Georgia, two teams that could contend not just for the SEC East title but also the national championship. Instead, Alabama faces two struggling programs in Tennessee and Kentucky with first year head coaches. This discrepancy surfaces in the win probabilities for the SEC West. 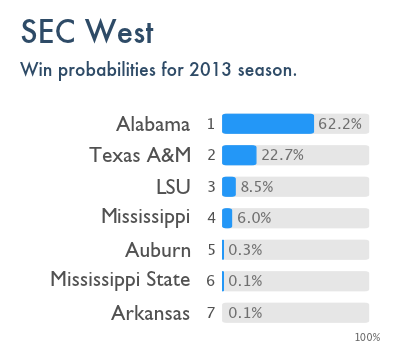 Alabama has a 62% chance of winning the SEC West, while LSU has only a 9% chance. LSU coach Les Miles has complained about the schedule before, even suggesting that a “random computer draw” pick the cross division games. You know something is wrong when a football coach suggests using computers.

Michigan plays Ohio State, a potential national title contender, while Nebraska and Michigan State duck the Buckeyes this year. Michigan and Nebraska both play at Penn State, a program still in good shape despite the devastating sanctions from the Jerry Sandusky scandal. Instead, Michigan State gets arguably the 3 worst teams in the conference. 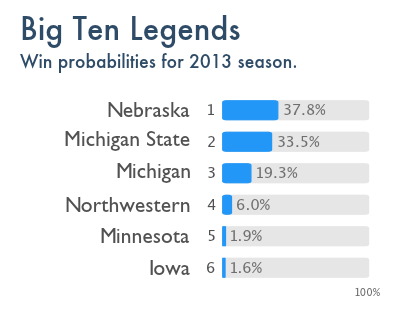 This division is an interesting case study for schedule imbalance since my preseason rankings rate these 3 teams so closely. Only a point and a half separate Nebraska from Michigan State, with Michigan in between.

In my simulations, Michigan State has a 34% chance to win the division. Michigan has a 19% chance despite a higher rating than the Michigan State. Nebraska, which has a home game against Michigan State, has 38% chance. The schedule does no favors for Michigan.

These odds are calculated from my preseason rankings, which rank Ohio State 16th in the nation. This is contrary to the national consensus that the Buckeyes will contend for the national title. If the Buckeyes are actually one of the top 3 teams in the country, the gap in win probability between Michigan and Michigan State will get larger.

Out west, teams play a nine game conference schedule. This includes the 5 teams from within the division and 4 of 6 teams from the other division. The California schools (Stanford, California in the North, USC and UCLA in the South) play each other each season.

These schools insisted on keeping these rivalries intact when the conference grew from 10 to 12 teams. And no one will argue against playing a historic rival every year, especially with the ticket sales these games generate. However, these games will have an impact on the Pac-12 North division.

Here are the cross division games for Oregon and Stanford, two highly ranked teams expected to contend for the division. 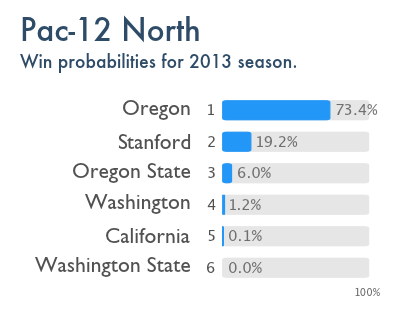 A big part of this discrepancy is that the preseason rankings have Oregon rated a touchdown better than Stanford. Whether this holds up depends on how well new Oregon coach Mark Helfrich does after Chip Kelly left for the Philadelphia Eagles. However, schedule also plays a role in these odds.

How to fix the imbalance in schedule

With today’s mega conferences in college football, your team no longer plays every other team in the conference. This can lead to an imbalance of schedule across teams in a division, as you can see in SEC West, Big Ten Legends and Pac-12 North this 2013 season. This imbalance will affect your team’s odds of winning the division.

In my next blog post, I’ll suggest how to fix this problem. There’s no perfect solution, except for going back to 1991 and convincing Roy Kramer not to add to additional teams to the SEC. But fans deserve better.

Do you have any suggestions for how to fix the imbalance in conference schedule? Let me know in the comments.