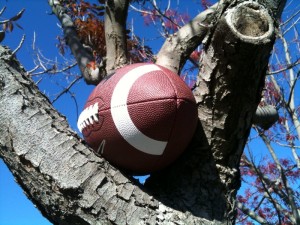 Some metrics are like getting a football stuck in a tree.

I’m a big fan of the Sloan Sports Analytics Conference. I even posted on their blog saying anyone interested in sports analytics must attend.

But sometimes they get it wrong.

This year, they accepted the talk “Identifying an accurate metric for football efficiency”. Tim Chou, a football coach, discovered yards per point as the new way to evaluate football teams.

There are many problems with this premise.

First, yards per point is not a new concept. Phil Steele, who publishes a yearly preseason magazine, has been writing about it for years.

Second, yards per point is not a good metric for football. Randomness plays a big role in its value, mostly due to turnovers. Phil Steele uses it as a metric to determine teams that got lucky the previous season.

Over at Bill Connelly’s Football Study Hall, I discuss the problems with yards per point as a football efficiency metric. Kansas State’s offense from last season is a perfect example of these problems. To read the article, click here.

After seeing this article, Jeff Fogle at Stat Intelligence wrote a post in which he remembers questioning yards per point back in 1986. This is neither a new or particularly useful concept.