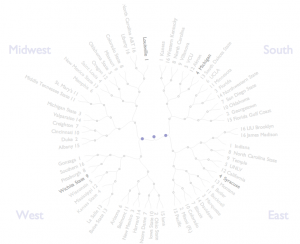 Numbers are most interesting when they reveal hidden truths in sports. In getting ready for the Final Four, we were surprised by these findings.

With athletes like Chane Behanan and Gorgui Dieng, Louisville should rebound the ball extremely well. And they do on the offensive glass, pulling down 35% of rebounds compared with a 27.5% Division I average. However, Louisville is an average defensive rebounding team, allowing their opponents to grab 27.1% of rebounds. This could pose a problem against Wichita State, an excellent offensive rebounding team.

Wichita State has allowed 91.2 points per 100 possessions, 36th best in the nation. However, when we adjust this raw number for strength of schedule, their defensive rank shoots up to 12th in the nation. This adjustment comes from the 9 of 10 Missouri Valley conference teams that have an offensive efficiency in the top half of Division I teams. The Shockers are predicted to allow 88.2 points per 100 possessions against an average team.

The Shockers are a tough team that slows the game down and control the boards. While The Power Rank gives Louisville a 6 point edge, Wichita State could prevail by getting hot early from 3 point range. Then their excellent defense could take over, preventing baskets and the opportunities for Louisville to set up the pressure defense. Moreover, Louisville is less likely to make up a deficit quickly, as they only shoot 32.7% (222nd in the nation) from 3 point range.

From the raw statistics, Syracuse is not a good shooting team. From 2 point range, they hit 48.6% of their shots against Division I opponents, 125th in the nation. However, this doesn’t account for the strength of their schedule. In the Big East, 10 of 15 teams had a raw field goal percent defense in the top 100.

We use our ranking algorithm to adjust 2 point field goal percentage for strength of schedule. Syracuse moves up to 62nd in the nation. They’re not the best shooting team in the country. However, the Orangemen will get the job done if Michigan has one of their poor defensive games. The Power Rank has Michigan favored by about 2 points over Syracuse.

From our interactive bracket, the four teams have the following likelihood of winning the tourney.

What do you think? Let us know about your basketball insights in the comments below.