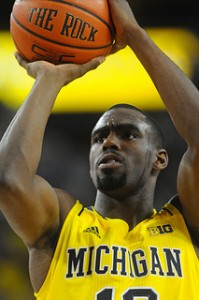 You may have wondered how much nature matters in playing college basketball. For example, Michigan will feature Tim Hardaway Jr., Glenn Robinson III, and Jon Horford against Kansas in their Sweet Sixteen game tonight. All three players had fathers who played in the NBA.

In addition, Duke benefits from the shooting of Seth Curry, who most likely learned his soft touch from his father. Dell Curry played 17 season in the NBA. The list of current college players with NBA genetics extends from Juwan Howard Jr. at Detroit to Shawn Kemp Jr. at Washington.

How much more likely are you to play in Division I college basketball if your dad played in the NBA? Jon Wertheim of Sports Illustrated proposed this question to me. We dug into the numbers to find out.

The odds of playing college basketball

With 4,511 rosters spots from a pool of 6 million, there is a 1 in 1330 chance that a typical high school graduate plays college basketball.

To determine the number of current college players with a father that played in the NBA, we simply count all the players. These 22 players are listed below. Clearly, this is an underestimate, as we might have missed some players. In fact, Jon and I missed Glenn Robinson III, one of the most well known players, in our first run through this list.

We also need the total number of college aged men with fathers that played in the NBA. Finding this number requires knowing the number of boys fathered by NBA players between 1990 and 1994. With the social habits of NBA stars, this is impossible.

However, we can make an educated guess about the number of college aged men with fathers who played in the NBA. Wikipedia lists a total of 4,699 players in the history of the NBA. Let’s assume that 1 in 10 of these players had a child between 1990 and 1994, giving a pool of 470 college aged young men.

Now, let’s be honest. 470 is an absurd overestimate. In 1990, the NBA only had 324 players total. However, that’s part of our strategy. We underestimate the actual number of college players but overestimate the pool of young men. This gives us a lower bound on the odds that a child of an NBA players makes a college basketball team. With 22 players from a pool of 470, the odds are 1 in 21, significantly higher than the population at large. The real odds could be as high as 1 in 10.

With these odds, you are at least 62 times more likely to play college basketball if your father played in the NBA.

This number is astounding. To put this in perspective, our analysis was sent to a professor in population statistics from a prestigious west coast university. Along with some minor edits, he told us about the following result from his research.

Calculations I published in 1988 indicate that the average American male is about 12 percent more likely to pursue his father’s occupation than any other. The probability was somewhat higher for highly skilled professions.

Clearly, genetics matter, from height to quickness to vertical jump. Of course, these young men grew up in families seeped in basketball. Their fathers most likely taught them the skills they need to make it to the college level.

Please let us know if we’re missing a player with a father who played in the NBA. I just added Ohio State’s Shannon Scott last night while watching their Sweet Sixteen game against Arizona.

Of course we didn’t get all college basketball players during the 2012-2013 season with a father who played in the NBA. These are additional players pointed out by our readers in the comments.