Do you get frustrated looking up statistics for an upcoming game? Wouldn’t it be convenient to have an offense’s statistics next to the numbers of the opposing defense to make a comparison?

And forget about misleading statistics like pass yards per game. These numbers can become inflated for an offense that must throw to make up late game deficits.

The Power Rank solves these problems with match up visuals. To understand how these work, check out this visual for yards per pass attempt. 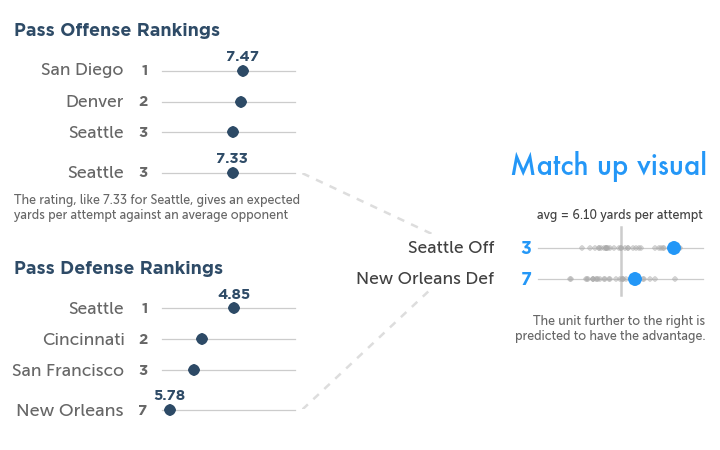 A stronger defense gives up fewer yards per attempt. The visuals shows these teams further to the right, just like for better offenses. This facilitates making a comparison between an offense and an opposing defense in the match up visual. The unit further to the right has better numbers compared to the league average.

For these NFL team pages, click on an opponent in the schedule to see different match ups.

Let me explain a few key features of the visuals.

The primary offense versus defense visuals uses yards per pass attempt. In the NFL, this quantity correlates with winning more strongly than any other efficiency statistic. This is different from college football in which yards per play correlates most strongly.

The yards per pass attempt are adjusted for schedule with The Power Rank algorithm.

The team rankings also use this algorithm but use on margin of victory in games as input. It’s interesting to see which teams the passing numbers differ most from the team rankings.

On the other hand, rush efficiency by yards per play has almost no correlation with winning in the NFL. Hence, the visuals for rushing are lower in the visual.

As a corollary to the importance of passing, sacks are a key statistic in the NFL. For the offense, sacks denote the number of sacks allowed per 100 pass attempts. Lower numbers are better, and they are shown further to the right on the visuals. It takes some getting used to flipping your thinking for this stat.

Do you want updates on all our content, including both articles and visualizations? Sign up for our free email newsletter.