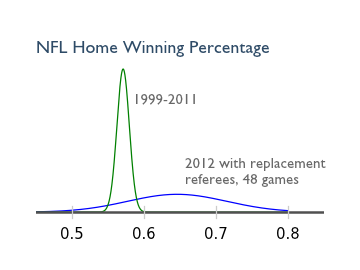 Are you mad at the NFL’s replacement referees? These scabs just gifted a win to Seattle over a deserving Green Bay team on Monday Night Football. It’s so infuriating that union busting politicians have come out in favor of the NFL referees union.

We know referees favor the home team. In the book Scorecasting, Toby Moskovitz and Jon Wertheim did extensive research on the role of referees in home field advantage. For example, the winning percentage for home NFL teams went down after the NFL started using instant replay. More plays were overturned for the road team.

How much more of an advantage are the replacement referees giving the home team?

This season, the home team has won 64.6% of NFL games this season. This is higher than the 57.1% from the 1999 through 2011 seasons, the modern era of instant replay in the NFL. However, we don’t know this year’s home winning percentage with much precision because there have only been 48 games. The true percentage could be higher or lower than 64.6%. We can only estimate the distribution of this percentage, which is a bell shaped curve with a standard deviation of 7%. See the figure above. Note that there’s even uncertainly in the home advantage estimate over 13 years of regular season games.

One can show there’s a 85.6% probability the replacement referees are giving the home team a greater edge than the usual referees. While high, this probability is not greater than the 95% used in medical research to validate a result. One can also analyze the margin of victory for the home team, using 3.48 points this year compared with the 2.57 from 1999 through 2011. Then it’s only 68.3% certain the replacement referees are giving a greater home advantage than the normal referees. This is roughly consistent with the findings of Brian Burke at Advanced NFL Statistics.

The data points to an extra home field advantage. But the results aren’t strong enough to publish in a scientific journal. Yet. We’ll keep you updated.