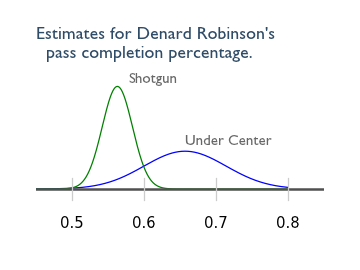 Michael Rothstein at WolverineNation of ESPN had an interesting article about Michigan quarterback Denard Robinson yesterday. They found that Robinson has a better completion percentage under center than in the shotgun formation. Over his career, Robinson completed 65.7% of his passes under center (46 for 70) while only completing 56.3% of his passes in the shotgun (316 for 561).

The problem is that 65.7% is only an estimate of Robinson’s true completion percentage under center. His actual percentage might be 55.8%. Due to the randomness of college football, we measure 65.7% over the sample size of 70 throws. Maybe his receivers made some jaw dropping catches on bad throws. Of course, his actual percentage might also be 70% because his receivers are dropping lots of passes. We don’t know with certainty.

However, with a simple probability model, we can calculate a distribution of pass completion percentages for Denard Robinson under center. As shown in the figure, this distribution has a bell shaped curve with a width. We can do the same for his completion percentages in the shotgun formation. Since he’s had so many more attempts, the width of this distribution is much smaller. The more throws we see Denard make, the more certain we become about his abilities. Both of these curves are shown in the figure. (The curves both have the same area underneath them. The curve for the shotgun rises much taller due to the narrow width.)

With all this uncertainty, there’s a probability that Robinson is actually a better passer in the shotgun than under center. Intuitively, you can see that in the overlap of the distributions. With a simple numerical experiment, we determined that there’s only a 6% chance that Robinson is better in the shotgun. ESPN’s conclusion will be right 94% of the time, which is pretty good.

But back to football. Rothstein also notes that Robinson runs the ball much better out of the shotgun. Michigan will still set up in the shotgun to take advantage of his explosive speed.