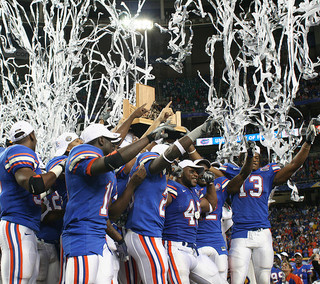 That’s what happens when one conference has won the last 6 national championships in college football. Not since Vince Young led Texas over USC in the 2006 Rose Bowl has a team from another conference won it all.

How will they do in the upcoming 2012 season?

To find out, we’ll go a numbers fueled romp through the league. Here at The Power Rank, we take sports numbers and adjust them for strength of schedule. On the most simple level, we use margin of victory to calculate our team rankings.

Recently, we’ve expanded our methods to other football numbers such as pass and rush yards per attempt. It provides a complete picture of rushing and passing in college football that accounts for strength of schedule. In this early stage of football analytics, it’s a rather unique set of results. Bill Connelly does some passing and rushing numbers over at Football Outsiders. That’s it.

Here, we’ll look at our numbers from the 2011 season that might have relevance in the upcoming season. Unless otherwise noted, we’re referring to our rankings and rating that account for schedule strength in the content below.

11. The rank for Alabama’s rush offense from last year. We gave them a 5.46 rating, meaning they would rush for 5.46 yards per attempt against an average rush defense. That’s significantly better than the 4.74 yards per attempt over all Division I games last year. They lose running back Trent Richardson, who was 3rd overall pick in the 2012 NFL draft. However, Alabama brings back linemen Barrett Jones, D.J. Fluker and Chance Warmack. The Crimson Tide rush offense will be an interesting test as to the importance of a star running back. (1)

6. Alabama’s rank in 2010. There were coming off a national championship, but went a disappointing 10-3. But with the schedule they played in the SEC West, our team rankings thought quite highly of the Crimson Tide. Nick Saban’s teams don’t fall off too much in their off years. (2)

10. The rank of Alabama’s pass offense last year. Yes, our rankings consider their passing better than their rushing. And it could improve this year with another year of experience for quarterback AJ McCarron. Last year, McCarron was fighting for his job during August practice. At the end of this year, he may go down as one of the greats at Alabama. (3)

2. The rank of LSU’s pass defense last year, predicted to give up 4.39 yards per attempt against an average pass offense. Teams in Division I averaged 6.22 yards per pass attempt last year. LSU lost 2 cornerbacks to the NFL draft and another, Heisman candidate Tyrann Mathieu, to off the field problems. Despite a tremendous defensive line, LSU’s pass defense rank will slip this year. (4)

2010. The last year LSU fans wanted coach Les Miles’ head on a platter. Two years ago, the Tigers needed a late penalty to squeak by Tennessee and a miraculous bounce on a fake field goal to beat Florida. Of course, all this hot seat talk vanished last year when LSU went undefeated in the regular season and made the National Championship game. However, LSU enjoyed a +20 turnover margin last year. Due to the randomness of turnovers, their turnover margin won’t be as high this year. LSU is the most overrated team in the nation. (5)

4.03. The yards per attempt the stingy South Carolina pass defense allowed last year. When adjusted for strength of schedule, this only slips to 4.39 against an average pass offense, good for 3rd in the nation. They lose 3 starters, including NFL first round draft choice Stephon Gilmore. Expect this unit to regress. (7)

2. The number of years in a row that Georgia does not play LSU and Alabama in the regular season. Strength of schedule matters even more in the conference championship game era of college football. Since conferences need at least 12 teams to hold a championship game, teams no longer play every other team in their league. (8)

4.95. The yards per pass attempt Georgia’s expected to give up against an average pass offense. This ranked them 8th in the nation last year. They only lose one starter and have the potential to keep this lofty ranking this season. (9)

28. The number of ranking places that Georgia’s rush defense drops when going from yards per game to our adjusted yards per attempt. They allowed 120.4 yards per game, good for 11th in the nation. Note this number does not include sack yards like the official stats do. However, they allowed 4.16 yards per carry, 17th best in the nation. Adjusting for strength of schedule, Georgia lands at 39th, expected to give up 4.38 yards per carry to an average rushing offense. This drop comes from facing below average rush offenses, something that happens when an SEC team doesn’t play Alabama and LSU. There is potential for improvement this season, as Georgia features 700 pounds of defensive tackles (John Jenkins and Kwame Geathers) in the middle of the defense. (10)

3. The number of times in the last 4 years that Arkansas running back Knile Davis has fractured an ankle. One fractured ankle is bad luck. Two makes one worry. Three becomes a trend. Can Davis stay healthy? (11)

6. The highest rank of a passing offense last year (Arkansas) with a returning starting quarterback this year. Arkansas quarterback Tyler Wilson completed 63% of his passes last year. He loses 3 receivers to the NFL draft, so production at this level remains a question this year. (12)

85. The ranking of Arkansas’s run defense last season. This must improve for the Razorbacks to have any chance of winning the SEC West ahead of Alabama and LSU. Hope springs eternal as they return 6 of their top 8 defensive linemen from last season. (13)

2. The number of coordinators that Auburn head coach Gene Chizik had to replace this season. (14)

120. The ranking for Auburn’s pass protection last year after adjusting for strength of competition. They allowed a sack on 9.9% of pass attempts, compared with an average of 6%. This rate only gets worse (10%) when we adjust for strength of schedule. This inability to protect the quarterback most certainly contributed to the poor pass offense. Even with the loss of 3 starters on the offensive line, it will be difficult for a top tier program to protect their quarterback this poorly again. (16)

11. Texas A&M’s final team rank last year. Don’t let the 7-6 record fool you. The Aggies lost a horde of close games to very good competition. They might not hang so close this season with new coach Kevin Sumlin. (17)

6. Nate Silver’s estimate for how Texas A&M ranks for number of fans. Undoubtedly, the SEC understood the magnitude of this fan base (about 2 million) when it pursued Texas A&M to join its league. (18)

91. The number of places Texas A&M’s pass defense improves with our analytics. In a pass heavy Big 12 last year, they allowed 249.9 yards per game, 106th in the nation. However, the Aggies only allowed 5.78 yards per pass attempt compared with a 6.22 average. This was good for 36th in the nation. When adjusting for facing quarterbacks Robert Griffin III (Baylor) and Brandon Weeden (Oklahoma State), the pass defense rockets up to 15th in the nation. Northwestern threw for a measly 3.35 yards per attempt against this defense in their bowl game last season. One must account for schedule strength in college football numbers. (19)

3. The number of true road SEC games Florida plays this year. They play a total of 8 SEC games this year, with one neutral site game with Georgia. (20)

18. Year end ranking for Florida’s run defense last year. The Gators allowed 146.9 yards per game last year, only 39th best in the nation. However, they only allowed 3.99 rush yards per attempt in the run heavy SEC compared to a 4.74 college football average. This was good for 17th best in the nation last year. The adjustment for schedule strength doesn’t change this much. However, they have 10 starters returning on defense, so they could improve on this ranking. (22)

18. The rank of Missouri’s rush offense for the 3 games they were without running back Henry Josey. While Missouri finished the year ranked 4th in rush offense, they were still a top 20 rushing attack without their starting back. Good thing, as Josey probably won’t be ready for their first game. Missouri also needs to replace 3 starters on the offensive line. (23)

4. The number of rush defenses in the SEC better than Missouri last year. This number includes Texas A&M, who will also join the SEC this year. The other teams were Alabama, LSU and Florida. Missouri, ranked 24th in rush defense, would have fit in quite well in the SEC last year. This year, they must replace 3 starters along the defensive line. (24)

84. The highest ranking for any of Mississippi‘s 4 units (pass and rush, both offense and defense). They ran the ball at the level of the 84th best team in the bowl subdivision last year. With 16 starters returning, new coach Hugh Freeze has an incredible teaching job ahead of him. (25)

85. The number of games that Tennessee won in the last 10 years with Phil Fulmer as head coach. This 10 year run started the year after Fulmer led Tennessee to the National Championship. That’s 8.5 wins per year. Tennessee has won 18 games in the 3 years since. That’s 6 wins per year. (26)

38. The rank at which Vanderbilt ended last season. For first year coach James Franklin, it was a significant improvement from the 95th they finished the year before. (27)

Not enough numbers? Check out our complete rankings. It’s a part of our premium college football package that will be free for everyone through the first month of the 2012 season.