In a previous article, we asked whether Gene Chizik was a good coach and looked at head coaching positions. Did he run Iowa State into the ground for two years but then get extremely lucky at Auburn with Cam Newton and Nick Fairley to win the national championship in 2010? Or was Auburn’s poor performance in 2011 an inevitable result of losing Newton and Fairley, implying that Chizik will consistently have Auburn in the national championship hunt? In our previous article, we offer an infographic for you to draw your own conclusions.

In this analysis, we looked at a team’s performance relative to how it faired before and after the coach’s tenure. A school’s resources for football remain roughly constant over time. Even T. Boone Pickens couldn’t change Oklahoma State football overnight with his money. Here, we apply this idea to Gene Chizik’s tenure as a defensive coordinator at UCF, Auburn and Texas. Instead of using our team ratings, we apply our algorithm to give a defensive rating that accounts for strength of schedule. Typically, the defensive rating gives how many points the unit gives up against an average FBS offense. However, we shift the rating here so that it gives how many points better the defense is than the average defense. So a rating of +7 in the visual below implies the defense would give up 7 fewer points than the average defense against the average offense. 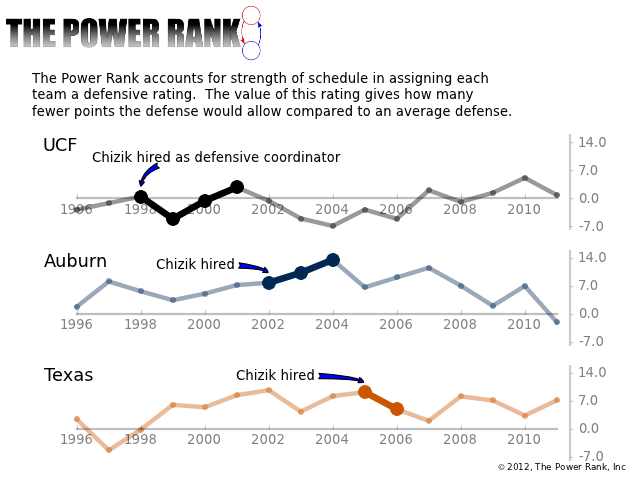 Again, a higher value implies a better defense. So how did Chizik do?

Central Florida. From 1999 through 2001, Chizik worked as the defensive coordinator under head coach Mike Kruczek. While the defense consistently improved during the last 3 years of his tenure, it fell off rapidly after Chizik left for Auburn in 2002. This led to Kruczek’s firing in 2003, paving the way for George O’Leary to take over as head coach. O’Leary is perhaps more famous for lying on his resume, an act that got him fired by Notre Dame after 5 days as head coach. But he has overseen a consistent improvement in defense from 2004 through 2010. UCF’s defense achieved a higher rating in 2010 than in Chizik’s last year as coordinator in 2001.

Over the 16 year period in the visual, UCF never had defenses as good as Auburn and Texas. This is why we evaluate a coach’s tenure relative a team’s performance at the same school. Also, we could have compared a defense to the average defense in the conference. However, the average rating of 12 teams can change significantly from year to year. Instead, we evaluate defenses with respect to a 120 team average.

Auburn. Chizik took over the defense at Auburn under head coach Tommy Tuberville in 2002 and oversaw a rapid rise to excellence. In 2004, Auburn went 13-0 only to be snubbed from the national championship game in favor of Oklahoma and USC. The defense featured future NFL players Carlos Rodgers and Jay Ratcliff and finished with a rating 13.5 points better than average, 2nd best in the country.

Texas. In 2005, Chizik left Auburn to work under head coach Mack Brown at Texas. Chizik served as co-defensive coordinator with Duane Akina. Led by quarterback Vince Young, the 2005 Texas Longhorns went 13-0 and beat USC in an epic national championship game. The defense posted a rating 9.2 points better than average, good for 7th in the nation. According to Wikipedia, this defense had 9 players taken in the next 3 NFL Drafts. Over the next two years, of which Chizik was around for only the first, the defense fell off quite a bit. This led to the demotion of Akina and the hiring of Will Muschamp as coordinator. In Muschamp’s 3 years at the helm, the defensive started strongly in 2008 only to drop in 2010, a performance eerily similar to the 2005-2007 time period.

So is Gene Chizik a good defensive coordinator? We make visuals so you can draw your own conclusions about the data. Please leave us a comment.

Related Posts:
—Is Gene Chizik a good coach? A look at his head coaching positions.
—Can a defense force turnovers?
—College football rankings.