After a weekend of the BBVA Compass Bowl and the GoDaddy.com Bowl, the national championship game is finally here. On Friday, we looked at what analytics said about Alabama Nick Saban’s 4th down decision making in the first game between Alabama and LSU. Here are 3 more thoughts about the rematch. 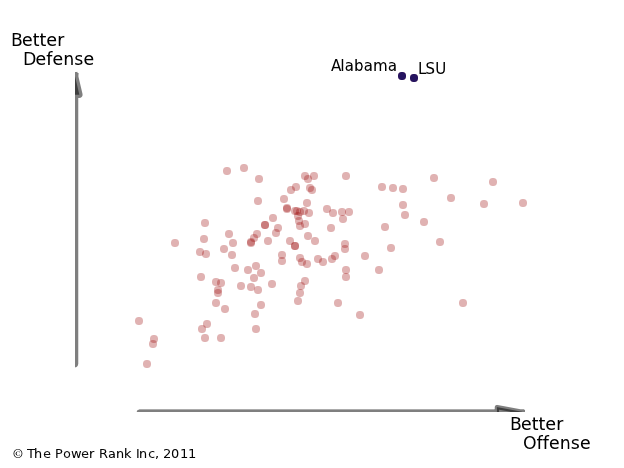 The visual shows our rankings that account for strength of schedule in scoring offense and defense. Alabama and LSU have clearly distinguished themselves among the 120 bowl subdivision teams this year, posting a 9.36 and 9.61 points per game in adjusted scoring defense. We got interested in whether any defenses over the last few years have come close to these numbers. No. Since 1997, only the 2000 Florida State defense (9.77) has come within a point of LSU and Alabama.

2. LSU has led the nation in turnover margin.

According to cfbstats.com, LSU has forced 30 turnovers while coughing up the ball only 8 times. This +22 turnover margin leads the nation, even ahead of Oklahoma State. However, we have previously written about how early season turnovers are weakly correlated with late season turnovers. So a large turnover margin is almost meaningless in predicting performance against Alabama tonight. In the future, we will attempt to account for this in our rankings to make them more predictive. At this point, we can only say that LSU might be overrated in The Power Rank because of this huge turnover margin.

3. If team A has a better defense and quarterback…

If team A has a better defense and quarterback than team B, then team A will win on average. Seems simple enough. Well, team A is Alabama. Alabama’s defense has topped our rankings all year. LSU only closed the gap after Georgia Southern gave Alabama fits with their triple option attack. At quarterback, LSU’s Jordan Jefferson has completed 59% of his passes over his career while Alabama’s AJ McCarron has posted a 67% completion rate this year. Moreover, Alabama and running back Trent Richardson have the edge in the running game, as they have run for 5.58 yards per carry compared to 4.96 for LSU.

And the winner is…

The last two thoughts suggest that a 60% chance for an LSU victory might be too high. In fact, the line has shifted from LSU by 1 to Alabama by 2. The Power Rank puts the most likely outcome around LSU by 4.2 points. Have an opinion on this tight game? Please leave us a comment.

Related Posts:
—About The Power Rank.
—Should Nick Saban have gone for it on 4th down against LSU?
—Can a defense force turnovers?
—College football’s incredibly slow progress towards a playoff.
—The Power Rank featured on KALX Spectrum, the science and technology show on UC Berkeley student radio.