Oklahoma State forced 5 turnovers in 44-10 rout over Oklahoma in this year’s Bedlam rivalry game. The turnovers had such an impact that Oklahoma didn’t score a touchdown until late in the 4th quarter despite racking up 358 yards. Oklahoma State preaches creating turnovers in practice, as players are required to repeat plays or run afterwards if they do not force enough turnovers. Defensive coordinator Bill Young’s units have forced 42, 34 and 30 turnovers in his 3 year tenure, well above the 22 turnovers that an average bowl subdivision defense gets a year.

But can a team really force turnovers?

An analytic approach to turnovers

Barnwell’s study suggests that Oklahoma State’s high turnover total will not correlate with their Fiesta Bowl performance. Turnovers are not that useful in predicting future performance. While Oklahoma State’s defense is 9th in our defense rankings, which is scoring defense that accounts for strength of schedule, this might be too high because of their good fortune in turnovers. 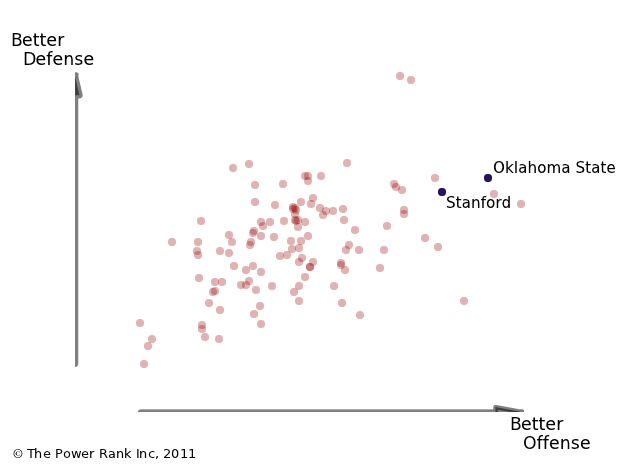 How Oklahoma State’s defense will match up with Stanford

To better understand how Oklahoma State’s defense will match up with Stanford’s 5th ranked offense, let’s break down rushing and passing separately. According to cfbstats.com, Oklahoma State’s defense gives up 4.34 rush yards per carry, 72nd worst in the country. This softness was apparent on a cold night in Ames. In overtime, Oklahoma State needed to prevent Iowa State from scoring to force another overtime. Instead, they gave up a touchdown on 3 straight running plays. Of course, this poor defense might have been caused by an urgency to force a fumble. But this just shows that a defense can’t necessarily force a turnover when it needs it most. Stanford has a run first offense that gains 5.33 yards per play. Quarterback Andrew Luck barely threw a pass when the running game racked up 10.1 yards per carry against Washington. If Stanford can get an early lead, Oklahoma State’s defense will see a steady diet of running plays.

Through the air, Oklahoma State’s gives up 6.2 yards per pass attempt, 15th best in the nation according to cfbstats.com. They give up fewer yards per attempt than Oregon, a defensive unit that gave Stanford fits in the passing game. After that game, Bay area media would not stop talking about how Cardinal receivers couldn’t get separation from Oregon’s secondary. Life might be difficult for Andrew Luck and the Cardinal offense if they fall behind and have to throw on the majority of plays.

The most recent team rankings predict Oklahoma State by 6.6 over Stanford. We’ll see how turnovers affect the actual outcome of the game.