BCS is bad
Voters are really biased
Time for a playoff 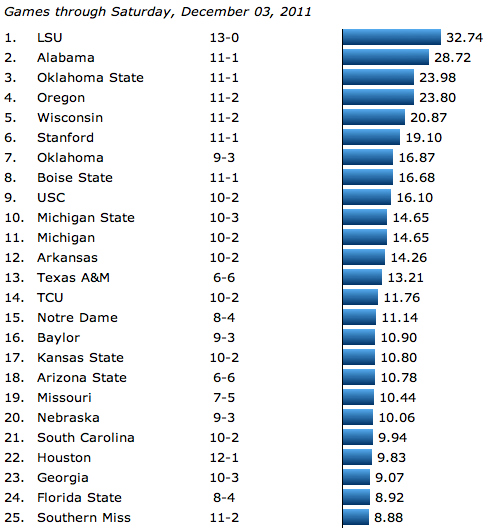 With the close of the regular season, college football left its fans with another mess. The BCS, or Brash, Conceited and Smug, picked Alabama over Oklahoma State to play in the national championship game against LSU. In a system that only allows 2 teams to settle the title on the field, the Cowboys got left in the dark despite a 44-10 thumping of rival Oklahoma this Saturday. Moreover, there is no Rose Bowl consolation for Oklahoma State. Last year, undefeated TCU forgot about the inequities of the system after their Rose Bowl victory over Wisconsin. The Fiesta Bowl won’t have the same charm for the Cowboys.

But Oklahoma State only has its own conference to blame. In 2008, SEC commissioner Mike Silve proposed a plus one plan, a four team playoff that would have given Oklahoma State a chance to play for the national title this year. Then Big 12 commissioner Dan Beebe opposed the idea. Every college football fan in America would love to see Oklahoma State face Alabama while Stanford takes on LSU. The Power Rank gives the following odds for winning this playoff.

LSU’s odds of winning the national title do not decrease much from its 59.2% chance of beating Alabama, but the system also allows for two additional and deserving teams to crash the party. A four team playoff doesn’t solve all of college football’s problems, as the discussion would shift from the merits of the 3rd to the 5th best team in the country. Oregon, Boise State, and Wisconsin have legitimate arguments for their inclusion in this system.

Hence, a sixteen team playoff, such as the system proposed by the authors of Death to the BCS, would be even better. The bracket would include all eleven conference champions as well as five at large bids and offer potential first round upsets by teams like Boise State and TCU. It also gives the SEC the chance to show true dominance by placing 3 or more teams in the final 4. Since football is America’s sport, the excitement over this playoff would dwarf that of the NCAA men’s basketball tournament. The prospect of cinderella upsets would make even the NFL playoffs seems boring.

There are many reasons we won’t see this true playoff any time soon. We speculated last year that a sixteen team playoff would funnel a huge fraction of revenue to the SEC because of their recent dominance, an unpalatable result for Big 10 commissioner Jim Delany. But another reason surfaced from watching ESPN’s documentary SEC Storied: The Play That Changed College Football. When SEC commissioner Roy Kramer introduced the first conference championship game in 1992, everyone thought it was a terrible idea. Primarily, it put up one last roadblock to an undefeated Alabama team that could eliminate them from the national title hunt. As the championship game between Florida and Alabama unfolded, the Crimson Tide’s worst nightmares were coming true, as the underdog Gators tied the game at 21 in the 4th quarter. Only an interception returned for an Alabama touchdown broke the tension. ABC immediately called to schedule another championship game for the next year, and the rest is history.

Now, everyone universally accepts the conference championship game as a good thing. Even the Big 10 and Pac 12, the two conferences most seeped in tradition because of their affiliation with the Rose Bowl, have now expanded to 12 teams to stage a championship game. It only took almost 20 years to follow the SEC. Change comes at a glacial pace in college football. There is no hope for a sixteen team playoff after current BCS agreement concludes at the end of the 2013 season. But, we can get a little excited over the whispers about a plus one system in the next cycle.

Thanks to long time follower Fred Vint for this week’s haiku. He moonlights as a mind reader.

– About The Power Rank.
– College football playoff.
– The Power Rank featured on KALX Spectrum, the science and technology show on UC Berkeley student radio.
– Wisconsin as a 68% chance of beating Michigan State.