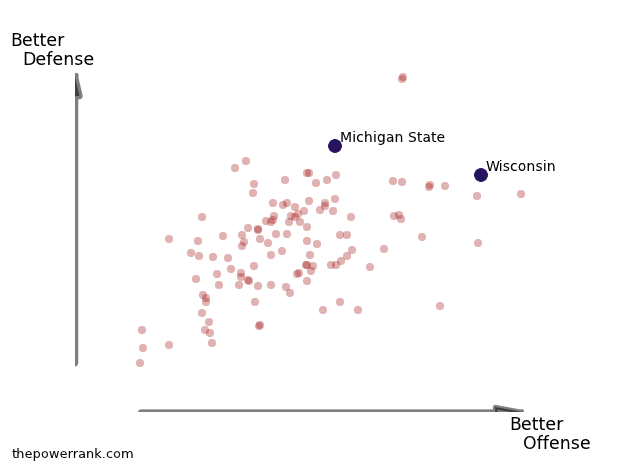 Wisconsin, behind a punishing running game, has the 3rd ranked offense in the country. However, Michigan State’s defense is ranked 3rd behind only Alabama and LSU. The unit rankings predict Wisconsin will score 31.5 points, almost exactly the 31 points they scored earlier this season against Michigan State. The Spartans, with the 30th ranked offense, will struggle against Wisconsin’s 8th ranked defense, as the rankings predict 23.3 points. So how did Michigan State score 37 points in their previous meeting? Everyone remembers the Hail Mary pass that the Spartans completed as time expired to win that game. But Michigan State also scored a touchdown on a blocked punt, a score that can’t be blamed on the Badger defense. The unit rankings predict a 8.2 margin of victory for Wisconsin, which corresponds to a 68% chance of victory. A line that favors the Badgers by 10 suggest a lean in favor of Michigan State.