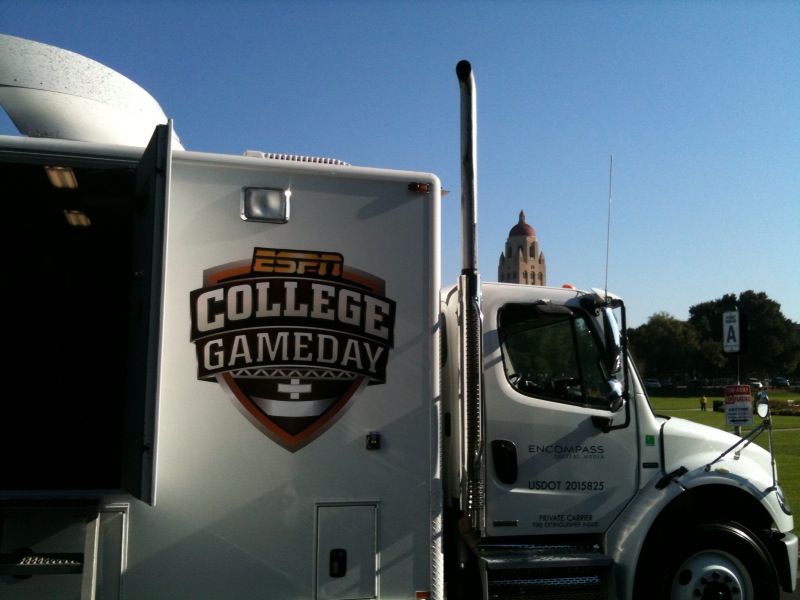 College GameDay has its characters. Lee Corso zings his “not so fast, my friend” across the set, as his zany personality sets the pace of the show. His headgear ritual in making a pick at the end of the show is GameDay’s signature moment. Kirk Herbstreit is the classic sports media personality, the all American guy who played quarterback for Ohio State. He brings the insider perspective on college football. But when the cameras are off, Chris Fowler runs the show. When Fowler first arrived at the Oval at Stanford during the pitch black hours of the morning, he made it a point to talk with thousands of fans gathered around the set. He asked that people refrain from any insensitive remarks about the child sex abuse scandal that had recently surfaced at Penn State.

The show had its usual college excitement and funny moments. Fowler did a little piece on high energy physics, asking his show mates to derive a probability distribution. There was stunned silence from Corso and Herbstreit. Corso danced in a tree costume for the second time in 3 weeks, and no one remembered who Herbstreit picked to win the Stanford Oregon game. After the cameras shut down, the excitement quickly left the set. Corso gingerly walked towards the bus, showing all seventy-six of his years in each step. It was a stark contrast from his on stage demeanor. Herbstreit quietly took some pictures with fans. And Erin Andrews may have been looking for a rich, single Silicon Valley entrepreneur. But Chris Fowler actually interacted with the fans leaning on the fence surrounding the set. He signed a countless number of Home Depot hard hats and thanked all the Stanford fans for contributing to a great show. Fowler really seemed to enjoy the interaction.

Before he made it off the set, I caught his attention by asking where he got his physics material and offering him some real physics applied to college football. Our ranking algorithm has deep roots in a branch of science called statistical physics. Chris gave me a minute of his time to explain how our algorithm accounts for strength of schedule in scoring offense and defense. He even asked me to write my email on the back of the promotional postcard I handed him, in case GameDay came back to Stanford. Of course, I didn’t have a pen, so I handed him a business card. He tucked both the postcard and business card next to the iPad in his briefcase. As gratifying as it is to have our content in the hands of an ESPN anchor, I’m not holding my breath that he’ll get in touch, especially since GameDay won’t return to Stanford this year. But his weekly fan interaction has undoubtedly contributed to the College GameDay’s unparalleled success.