Here we are, week 11 in the NFL.  In spite of the fact that Aaron Rodgers is on pace to post a record breaking season in almost every statistical category for a quarterback, Tebowmania is sweeping the nation.  But while Rodgers’ Packers (#1, 13.13) are all but a lock for a playoff spot, Tebow’s Broncos (#24, -2.81) are more questionable.  How questionable?  Well, let’s take a look a the current playoff picture by NFL standards: 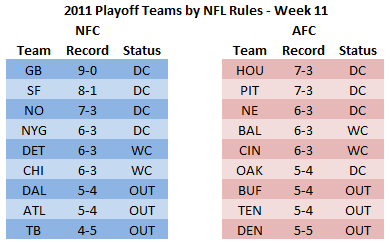 Currently Denver is not quite making the cut, but with a win over the Jets (#17, -0.03) last night they are only half a game behind division leader Oakland (#18, -1.83) and are 1.5 games out of the wildcard spot.  If they were baseball those numbers would be more encouraging, but with only 6 games left it will be difficult but not impossible for the Denver Tebows…  i mean Broncos…  to make the playoffs.  Also just missing the cut are the Bills (#16, 0.39) who have fallen flat after a fantastic start to the season, and the Titans (#15, 0.54).

But this is just what the records of the teams are, and those are going to change significantly over the coming weeks.  Less likely to change is each team’s Power Rank.  So let’s take a look at what the Power Rank predicts for the 2011 playoffs. 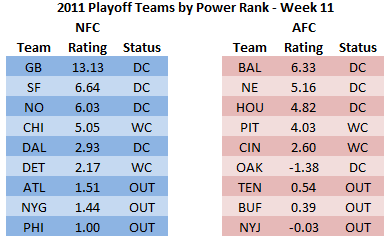 When the Power Rank is used to predict the teams that will make the playoffs some interesting things happen.  Denver is not even on the map.  Oakland is predicted to win the abysmal AFC West in spite of their negative rating.  Tennessee has the 6th best rating in the AFC, but Oakland gets the nod because a team from every division has to be represented.  (How bad is the AFC West you ask?  Every single team in it has a negative point differential this year.  Ouch.)

In the NFC a big change occurs in the NFC East.  Dallas (#9, 2.93) overtakes New York (#13, 1.44) for the division title, and the Giants go from division winner to watching the playoffs from home.  Detroit (#11, 2.17) hangs on to a wildcard berth, but barely.  Given the team’s recent slide and the fact that Jahvid’s Best’s return is not yet in sight it is reasonable to expect them to continue falling, meaning there may be room for the Falcons (#12, 1.51) or another NFC East team to sneak in later in the season.

Ok.  Now for a word on this Tebow guy and the triple option.  The triple option isn’t the newest thing to hit the NFL, it’s one of the oldest things to hit the NFL.  The Broncos are taking advantage of a league that is focused on the passing game, that has pass cover corners who struggle to take on strong runners (did you see Revis get trampled last night?) and smaller, faster defensive linemen who focus on rushing passers.  The Miami Dolphins (#27, -4.93) did the same thing in 2008, wowing the league with the “Wildcat”, a variation of the single wing formation that was popular when leather helmets were still used. Where is the Wildcat featured now?  In the same place that the triple option will be featured in a couple of years:  nowhere.

The truth is that the triple option doesn’t present a team with a ton of options.  So if teams feel threatened they will just stock up on a couple 350lb+ defensive linemen who eat up double teams and destroy any kind of surge to offensive line attempts to create.  If Tebow’s center and guards’ backs are being pushed into his face he can’t make his reads or execute his options, and as we’ve seen there’s not a whole lot else that guy can do.

At least on the field. 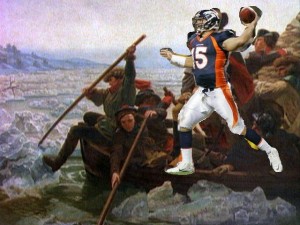 Leading the Broncos across the Delaware 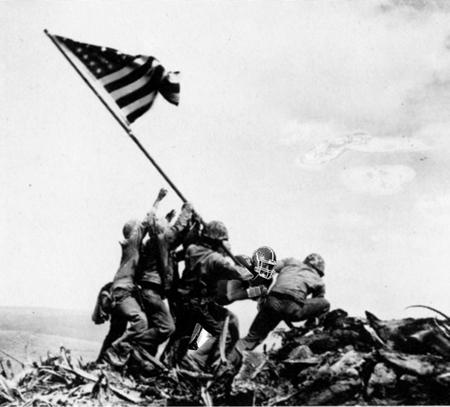 Raising the flag at Tebow-jima