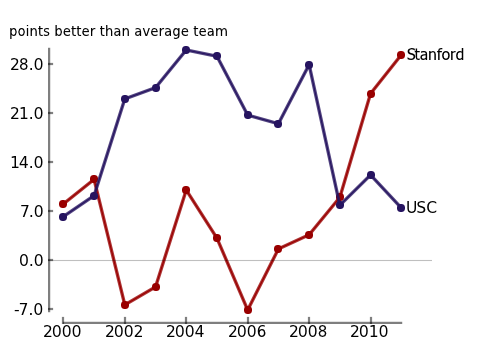 A historical look at Stanford and USC.

In 2000, USC hired Pete Carroll as head coach. While he was their fourth choice to take the job, Carroll created a college football dynasty at USC through competitive recruiting and a jovial atmosphere. The Trojan’s execution in big games was breath taking at times. However, USC was in decline by his last year in 2009, and he left the school with NCAA sanctions when he left for the NFL. In his successor Lane Kiffin’s second year, USC’s rating has slipped from last year despite a 6-1 record.

In 2006, Stanford hit rock bottom by going 1-11. The new Stanford Stadium didn’t seem to inspire the players or soon to be fired head coach Walt Harris. Jim Harbaugh took over in 2007 and created a physical mentality that has turned Stanford into one of college football’s elite teams. Stanford’s -7.1 rating after the 2006 season became 23.8 by the time Harbaugh left for the NFL after the 2010 season, a staggering 30.9 point increase in team strength. David Shaw took over as head coach this year and increased Stanford’s rating to 29.3 in his first 7 games, although they haven’t faced an opponent ranked higher than 45th in The Power Rank.

Stanford’s schedule gets tougher this weekend with a game at USC. The Cardinal offensive line will get tested against a USC team that is much better than their 49th ranking in scoring defense. While much has been made of three senior linemen that graduated last year, only center Chase Beeler made an NFL training camp roster, according to Stanford’s media guide. Moreover, tackle Jonathan Martin and guard David DeCastro, the returning starters, are rated as the 9th and 26th best NFL prospects overall by ESPN. Center Sam Schwartzstein, guard David Yankey and tackle Cameron Fleming have filled the starting roles and powered the Stanford to 10.1 yards per carry (446 total) against Washington last week. The Power Rank predicts a 18.9 point win by Stanford, significantly higher than the line of 8 in favor of Stanford. USC has a 15% chance of pulling an upset.