How to determine
Individual awards?
And do they matter?

As the MLS season enters it’s final week, discussion of season awards begins to dominate the airwaves almost as much as talk of the playoffs.  While the playoffs offer a great spectacle, one has to wonder at the value of individual awards in a team sport.  Of all the player honors MLS hands out, two are clearly the most quantitative: the Golden Boot, going to the player who scores the most goals, and the Goalkeeper of the Year.  Typically, the best keeper judged by some combination of their goals allowed average (GAA) and their number of saves.  The GAA metric is clearly not a function only of the keeper, as a strong defense will prevent shots from even coming his way.  While goals scored and saves made are not perfect measures either, they at least correspond to an action taken by a player (albeit at the discount of actions taken by other players).

So the question is:  does having a player who scores a lot of goals or a keeper who makes a lot of saves correspond to being highly ranked?  To answer that question, we performed a regression of rank versus number of goals scored by the most productive player on a team and the number of saves their keeper made.  For an apples to oranges comparison, we considered the total number of saves rather than that by a single keeper, which is reasonable since most teams rely on just one person between the sticks anyway.  While the correlation coefficient for the number of goals scored by the top goal scorer has a coefficient of 0.023, that number is statistically insignificant (for those who care, the R-squared value is 0.058 and the p-value is 0.33).  What this means is we cannot discern a clear connection between having a one good striker and being highly ranked.  Why?  Well strikers don’t score goals, teams score goals, and the object of soccer is to have the team score a lot, not necessarily an individual.  There is also some evidence from other sports that having one good player actually reduces the value of his teammates (see “Wages of Wins” by David Berri, Martin Schmidt, and Stacey Brook).  So while the Golden Boot is fun for fans, having the winner doesn’t guarantee a successful season.

In contrast, measuring the number of saves by a keeper does have a statistically significant impact (R-squared is 0.34, p-value is 0.011):  it correlates to a lower ranking with a coefficient of -0.009.  The statistics indicate this only accounts for part of a team’s performance, but still this result seems counter-intuitive.  However, the reason is quite clear.  A keeper with a lot of saves is a keeper who gets a lot of opportunities to block shots, hence, someone who’s goal is under a lot of pressure.  So a keeper who saves the average percentage of shots will have more saves if he plays behind a poor defense… but opponents will still score more goals.  Hence, measuring the number of saves is actually a better measurement of the incompetence of the team’s defense rather than the skill of the keeper.

However, we can’t resist suggesting a few players worthy of some accolades.  While the Power Rank can’t determine who generated the most value over the course of the season (yet!), it can suggest places to look.  In addition to providing an absolute rank, a team’s offensive and defensive abilities can be individually assessed.  The top 5 teams in each category are in the tables below, with the value being the expected number of goals scored or conceded against an average opponent. 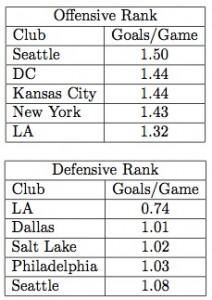 Defensively, the LA Galaxy (#1) are best by 0.27 goals, so someone on their defensive side would make sense.  Goalkeepers Donovan Rickets and Josh Saunders essentially split the time this year, and the Galaxy tend not to play with someone in a strictly defensive midfield role.  Therefore center-back Omar Gonzalez seems the best choice of this group as the anchor of their defense.

Meanwhile, the top ranked offense is owned by the Seattle Super Sounders (#2).  In terms of standard statistics, two of their players have distinguished themselves:  Fredy Montero (12 goals, 8 assists) and Mauro Rosales (5 goals, 13 assists).  Because they are both so good, it’s hard to declare one of them as being the most valuable, especially when they are only 0.06 goals better than the next best team, DC United (#12).  While Charlie Davies has scored 11 goals for the Screamin’ Eagles, their side really picked up with the addition of Dwayne Derosario.  The Canadian has scored 12 goals for DC along with 7 assists (he also had 3 goals and 5 assists with Toronto (#18) and New York (#6) this year).  These numbers make him a good choice offensively.  Between the two, Gonzalez would be a better honoree because this has been a defensive season, and LA’s defense is so much better than that of their closest competitor.  However, the MVP is often an “Offensive Player of the Year” award (right, Heisman committee?), and DeRo is the likely recipient if United make the playoffs, while Gonzalez is probably going to receive Defensive Player of the Year honors.