We’re now in the final stretch of the MLS season, so with all respect to Jim Mora, it’s time to start talking about the playoffs. This week we’ll focus on an aspect unique to soccer that can make or break a team’s postseason hopes: draws. While fans of other sports will grudgingly admit that sometimes a game deserves no winner, this occurrence is common in soccer as typically 25%-30% of games end all knotted up. As of Sunday, this year in MLS the percentage is nearly 36%, and teams’ chances are riding on them: currently Kansas City (#4), Philly (#6), Colorado (#9), Houston (#10), DC (#11), and San Jose (#15) have more ties than either wins or losses, while amazingly New York (#5) and Chicago (#8) have more draws than decisions!

So what’s behind this spate of mediocrity? Unsurprisingly, all these teams have ratings around the middle of the rank, and with the exception of the lowly ‘Quakes, they are also all sitting in the middle of the table (Sporting KC may look hot in the east, but they’d be tied for fifth place in the Western Conference). While it makes sense that average teams will tend to draw more, this season it has happened at a much higher rate. For example, this last Saturday, three out of six matches were drawn… but it turns out it’s also not surprising that they all involved fewer goals than the average MLS game.

We can expect that as less goals are scored, the likelihood of a draw is greater. While the mathematical formula governing draw probability of two evenly matched teams can be visualized using Pascal’s triangle, what it boils down to is this: 0 goals: 100%, 2 goals: 50%, 4 goals: 37.5%, and so on, so that the fewer number of goals that are scored, the more often the match ends tied. Below we can see the draw percentage and goal rate going back to the 2002 campaign in MLS: 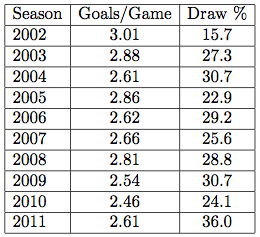 So over the past 10 years, the goal rate this season is tied for the third lowest. 2002 is the opposite, when defenses didn’t show up, yielding by far the highest goal and lowest draw rates. With this data, it turns out that for each additional goal per game, the frequency of a tie decreases by 18.5%. This year, we would expect the draw probability to be 29.0% with the difference attributed to factors we’re not including, most especially luck. However, this season is as much of a deviation as 2002 (expected draw probability of 21.6%) or last season (expected draw probability of 32.4%), albeit in the direction of more draws which doesn’t make MLS happy.

Of course, this phenomenon is not unique to soccer. While we haven’t run the numbers, it seems like there are more tied matches in soccer than there are overtime games in other sports where scoring is more common. More importantly, in soccer it matters more. Overtime in other sports is set up to produce a winner, whereas in soccer, winning earns 3 points whereas drawing gets 1. The differential encourages teams to play to win rather than draw, but it also selects for teams with good offense and bad defense instead of vice versa. That’s because a team which has half wins and half losses over the 34 game season will earn 17 more points than a team which draws all it’s games. However, when the playoffs start and every match has a winner, then both teams would have the same chance of winning. The Power Rank measures goal differential, not points, and knows to watch out for teams that “sneak” into the playoffs with a lot of draws.