Follow the leader
Notre Dame, then Michigan
Irish will cover 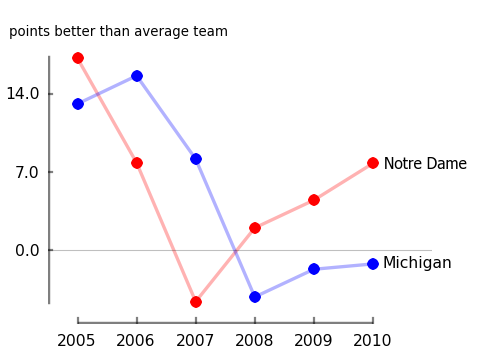 In 2005, Charlie Weis took over as head coach of Notre Dame and made two straight major bowl appearances (we do not type those 3 letters on this site) with Tyrone Willingham’s players. Luck was a factor the second year, as their rating dropped quite precipitously despite winning 10 games in 2006. That same year, the Michigan Ohio State game pitted the number one and two teams in the country. The death of former Michigan coach Bo Schembechler the day before made the game even more memorable. Ohio State won a close game, and Michigan made a similar drop in rating in 2007 as Notre Dame in 2006. Both teams have struggled the last three years, although Notre Dame certainly closed well last season by winning their last 4 games.

As these two teams meet under the lights in Ann Arbor this Saturday, it’s important to look at last week’s games in conjunction with The Power Rank to make a prediction. Against South Florida, Notre Dame lost the turnover battle 5-0 but still only lost 23-20. The Fighting Irish exactly doubled South Florida in total yardage, 508-254. Turnovers, particularly fumbles, involve luck, and no one should expect another 5 turnovers from Notre Dame this weekend. On the other hand, Michigan benefitted from a 3-0 turnover margin against Western Michigan. With 7 minutes remaining before half time and the score tied at 7, Western Michigan was knocking on the doorstep before a tipped pass led to a 94 yard interception return for a touchdown. Michigan won 34-10 in a lightening shortened game but only out gained Western Michigan 288-279 in total yardage. Questions remain about Michigan’s defense.

The current rankings have Notre Dame as 7 points better than Michigan. With a 3 or 4 point edge for the Michigan home field, this brings us quite close to the line of Notre Dame by 3. However, with the screwy games from last weekend, it may be better to take the final rankings from last season, which have Notre Dame as a 9 point favorite on a neutral field. With any reasonable home field edge, Notre Dame should still cover a 3 point spread.