This is a tough time of year for a guy like me. I love football and baseball, and I don’t really pay attention to any other sports.

Except for the NCAA basketball tournament.

March Madness is the wonderful little stop-gap that gives me something interesting to pay attention to while baseball finishes up Spring Training.

Like most Americans, I dutifully fill out my bracket each year. Like some Americans, I do so in spite of not having watched a single game of basketball all year relying instead on seedings, personal grudges that are unrelated to baseketball, and some old time-tested picking tricks like choosing a couple 12 seeds to beat 5 seeds. As you can imagine, my pool entry fees are usually more of a donation than anything else.

If you’re like me The Power Rank provides a golden opportunity to make picks based on information that your friends, family, and coworkers may not be wise to just yet. Or if you’re a diehard fan with ingrained biases looking for a more objective perspective than you would find from most fans and experts, this article may help you avoid picking based on emotional attachments.

In the spirit of mathematical objectivity, I’ve filled out a bracket following our algorithm’s predictions, and I would like to share the results with The Power Rank faithful.

Overall, The Power Rank’s predictions match the seedings fairly closely. For example, the four 1 seeds are the top four teams in The Power Rank. Also, the coin flip games between 8 and 9 seeds are predicted to be just that by The Power Rank, which shows that all four of those matchups should be close.

Now, that doesn’t mean that Ohio State, Duke, Kansas, and Pittsburgh should necessarily be your Final Four. The Power Rank’s Elite Eight features teams from #1 ranked Ohio State to #11 ranked Washington. So, from that round forward there wouldn’t really be any clear favorites to win particular games, so the last three rounds of the tournament will be outside the scope of this discussion.

The key to winning brackets is picking the right upsets. Those of us who used to pick winners by seed alone are well aware of that pitfall. So here are the goods, the Power Rank upsets:

– 11 seed Marquette (Power Rank #24) over 6 seed Xavier (#44). The seedings and The Power Rank generally match up so well that it’s hard for an outsider like myself to understand why these two teams are so flip-flopped and out of place, but there they are. According to the objective rankings, this is the most compelling upset of the tournament.

– Washington (#11) as a 7 seed beats out both 2 seed North Carolina (#17) and 3 seed Syracuse (#15) to make the Elite Eight. It is really too tough to call since all three teams are ranked so closely together. Moreover, Washington lost starting guard Abdul Gaddy in January while North Carolina and Syracuse have rich traditions of winning in March. But going purely by the rankings, Washington will slay these two giants before meeting #1 overall Ohio State. This is hardly the most solid recommendation based on the data but could be a best opportunity to pick a sleeper to go deep that most people will overlook.

– 3 seed Purdue (#6) over 2 seed Notre Dame (#12) and 3 seed BYU (#9) over 2 seed Florida (#18). These pair of upsets are both reasonable based on their respective Power Rank differences, and choosing a couple of 3 seeds to beat 2 seeds is hardly bracket heresy.

– 9 seed Illinois (#22) over 8 seed UNLV (#34). It’s true, the 8 seed versus 9 seed games are usually too close to call and that is true this year as well, but this is the only one of the four match ups that predicts the 9 seed coming out of top. If you’re looking to get an edge over the old coin flip technique, this may be your ticket.

The following games aren’t upsets, but are very tight match ups that could easily produce an upset or two:

– 12 seed play-in favorite Clemson (#31) over 5 seed West Virginia (#19) and 12 seed Richmond (#32) over 5 seed Vanderbilt (#27). 12 seeds beating 5 seeds are usually compelling picks, and this year is no different with fairly tight rankings for these two match ups. Play-in favorite Clemson (#31) is an especially interesting option for an upset win as people may see the play-in game on their bracket and assume that the solid 5 seed will just crush any team that is so bad it has to win a play-in game just to make the dance.

– 11 seed play-in favorite USC (#33) over 6 seed Georgetown (#23). Much like the Clemson (#31) over West Virginia (#19) pick, this one is based on getting a leg-up on your pool competitors who can’t bring themselves to choose a play-in winner to advance.

Last but not least, the brackets filled out strictly according to the Power Rank up the the Elite Eight: 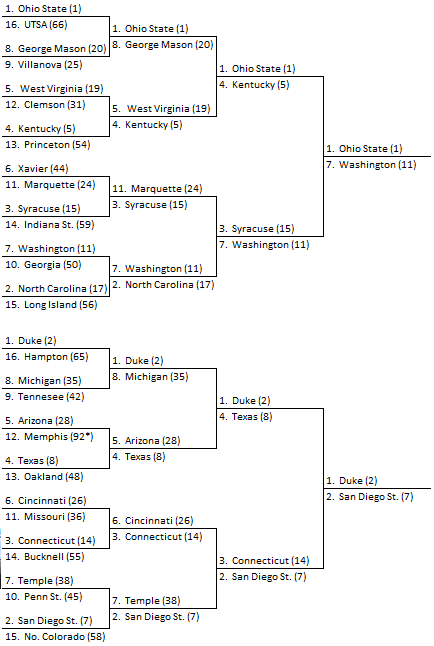 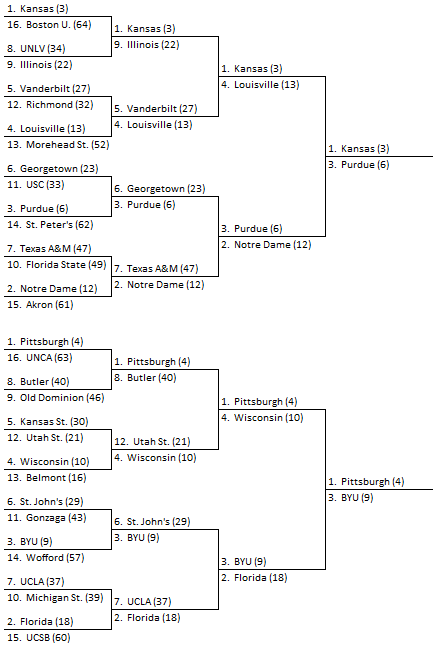