The Super Bowl features a matchup between two unique franchises. The Pittsburgh Steelers have been owned by the Rooney family since their inception in 1933. Since the 1969 season, they have had three head coaches and won six Super Bowls. The San Francisco 49ers have had three head coaches in the last four months. The Green Bay Packers are a non-profit franchise. That’s right, their founding documents do not allow them to make money. The Packers are owned by their passionate fan base, like Tom’s aunt who has a chunk of the old Lambeau field in her freezer.

On the field, the game will be intense, as the players won’t play another meaningful game for another 7 months. How will Pittsburgh’s center, who has never started an NFL game, matchup against Green Bay’s immovable man child BJ Raji? Can Troy Polamalu read the soul of Aaron Rodgers? Does Ben Rothelisberger or Clay Matthews weigh more? Tom breaks it all down in his preview.

Here, we’ll focus on a prediction. On page 157 of the book The Odds

, Chad Millman has an excellent description of how Vegas sets the line for the Super Bowl. A big factor in their analysis is common opponents. This year, Pittsburgh and Green Bay both played the 4 teams in the AFC East and the Atlanta Falcons. Tom breaks down these regular season games in this table, in which a positive point differential indicates a win for the Steelers or Packers. 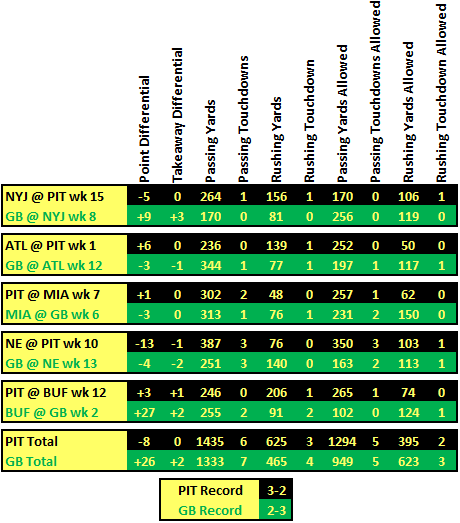 Moreover, Green Bay beat down Atlanta in the playoffs by 27 points, giving an average point differential of +12. Pittsburgh avenged their regular season loss to the Jets with a 5 point win in the playoffs, leading to a 0 average point differential. Overall, Green Bay outperformed Pittburgh against 4 of these 5 teams. Vegas accounts for these games in starting Green Bay as a 2.5 point favorite against Pittsburgh.

The Power Rank also considers these common opponents when ranking these two teams. However, the algorithm also accounts for games which link Pittsburgh and Green Bay by two teams. For example, Pittsburgh beat Oakland by 32, who lost to San Francisco by 9, who lost to Green Bay by 18. We’ll spare you the math; this sequence favors Pittsburgh. The algorithm actually accounts for sequences with any number of teams between Pittsburgh and Green Bay. It’s a little difficult to track all these sequences with pencil and paper.

In the end, The Power Rank has Green Bay by 2.6 points over Pittsburgh, very close to the Vegas line of 2.5. In essence, it’s a coin flip to determine whether Green Bay wins by 3 or more or Pittsburgh loses by less than three or wins. When our prediction and the line are this close, it is not advisable to wager money. This has happened in two playoff games this year. In the other 8 games, The Power Rank beat the line in 6. We’ll see see how 2.6 does on Sunday.