It’s a nebulous topic.  Whether it’s Our House, The 12th Man, or any other name homefield advantage is an intangible that’s often invoked in football.

This season I attempted to use the Power Rank’s neutral site predictive capability and account for home field advantage…  and failed.  I added an arbitrary three points for the home team, a practice that is relatively common when setting a betting line, but a practice that is hardly scientific.

Rather than develop a complex mathematical matrix to divine the true value of the homefield advantage (I’m just not that smart…  I’ll let Ed work on that!) I decided to poke back into the recent history of the NFL to see is homefield advantage is a truly intangible myth or if it is a real and tangible aspect of the game which might one day be quantifiable.

I gathered data from NFL.com for the years 2002-2010, the only years that represent the current 32 team configuration of the league.

The first thing I wanted to look at was regular season performance. 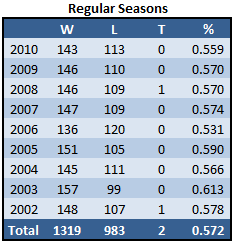 There’s a lot that goes into why playing at home is advantageous, from the comfort of your own familiar locker room to the jet lag (or lack thereof) of a coast-to-coast trip to field conditions.  One of the biggest and most obvious advantages is the crowd noise produced by a home team’s fans.  I wondered if this factor would increase the homefield advantage during the playoffs, when fans are going to be louder and more interested in every play of each game.

Here are the results for homefield advantage in the playoffs since 2002, with 2010 incomplete (and not counted): 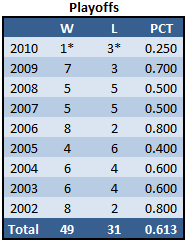 This time there’s an even stronger correlation between home team and victory in the final win percentage, but the playoffs have special conditions that must be considered before jumping to the conclusion that the correlation is in fact stronger.  First of all, in the regular season the home team is more or less random, whereas in the postseason the home team is determined by the strength of their regular season finish…  usually.

So in the wild card round, you have teams with better records visiting arguably worse teams that won their division.  The results from these four games last week?  A 1-3 record for home teams, with the Seahawks pulling of a somewhat miraculous win over the Saints.

So I also broke down the records of wild card games by homefield: 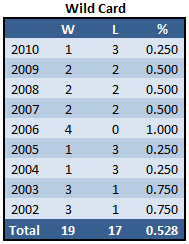 Not only is this correlation weaker than the homefield advantage in the regular season, its also generally weak.  52.8% versus 47.2% doesn’t create insurmountable odds.  In fact, the odds for an away team to win in the wild card round are about equal to the odds of beating the house on a casino Roulette wheel (with 0 and 00 spaces).

So what happens in the divisional and conference championship rounds when homefield advantage almost always goes to the team with a better record? 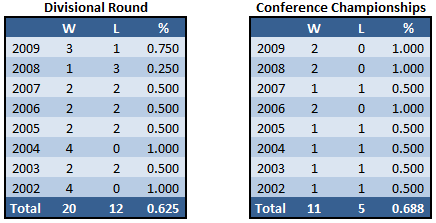 So what does that mean for this week?  All of this week’s match ups feature a weaker team visiting a stronger team.  This is the kind of correlation we see in the conference championship round of the playoffs, about a 69% chance for the home team to win versus 31% for the away team.

Seattle losing to Chicago and New York losing to New England seem like safe bets this week by conventional wisdom, but the other two games are less certain.  Baltimore finished with the same record as Pittsburgh and lost the division on tiebreakers.  The  Power Rank’s #2 team Green Bay visit the Falcons, who needed a few lucky breaks to win at home against the Packers in week 12 this season.

If one of these potential upsets occurs, the record for better teams playing at home this week will be 0.750, close to the expected 0.688 correlation that is shown in the conference championship rounds of the last eight playoffs.

So it seems that homefield advantage is certainly tangible, and is particularly strong when it favors an already superior team (according to record) in the playoffs.