To continue last week’s discussion of The Power Rank’s predicted playoff picture, I’d like to start with the games that were predicted incorrectly.

Misses by the Power Rank include Philadelphia over New York, Kansas City over St. Louis, and Detroit over Tampa Bay.  These are unfortunate errors, but the fault may not lie with The Power Rank, but rather with its interpreter…  me.

Last week I mentioned that The Power Rank accounts for games played in neutral sites, which isn’t the case for NFL football games other than the Super Bowl.  I gave each of the home teams an added three points to their rating, and in each of those games, there was an upset.  Had I stuck purely to The Power Rank’s ratings the predictions would have been 100% accurate.  Apparently my arbitrary adjustment was a little too much.

As it is, two of those three games were very close finishes.  Detroit beat Tampa Bay with a field goal in overtime, and New York lost to Philadelphia when their rookie punter made the mistake of letting DeSean Jackson get a chance to return a punt on the last play of the game…  which he returned for the winning touchdown.  The Kansas City win over St. Louis was far more convincing.

In all of the games where the three point adjustment didn’t affect the outcome the Power Rank was spot on.  Let’s see if it can keep up its streak in week 16!

The only game in the remainder of the season that was affected by the three point adjustment is this week’s match between the Bears and Jets in Chicago.  In light of last week’s revelation, I will take away the three points earlier spotted to the Bears and predict that the Jets will be victorious in spite of Rex Ryan’s alleged foot fetish fiasco.  The Jets will also be helped by the most unpalatable of late season NFL traditions, clinched teams sitting stars to get them rest before the playoffs.  The Bears have clinched the NFC North division and may rest some of their key personnel for a good portion of the game.

Speaking of clinched teams, Atlanta has also secured a spot in the playoffs, although they still have to fight for homefield advantage, and with division rival and playoff bound New Orleans visiting Atlanta this week they will have their work cut out for them.

The NFC playoff prediction has been significantly altered by last week’s errors.  With their loss to the Eagles, the Giants are predicted to lose their playoff spot to the highest Power Ranked NFC team, the Green Bay Packers.  The Rams loss to the Chiefs opened up the NFC West, with San Francisco staying alive and Pete Carrol’s Seahawks pulling into the lead. 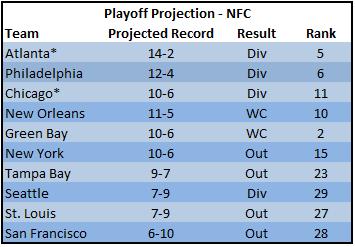 In the AFC, the Patriots clinched a playoff berth with the help of an improbable 71 yard kick return by their guard Dan Connolly.  The Steelers have also clinched a spot, although neither team has clinched their division or locked up home field advantage. 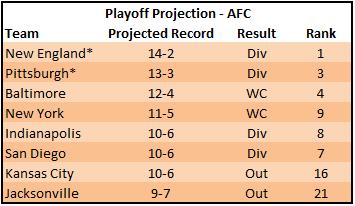 The only change to the AFC prediction from last week is that Kansas City’s record improves although they would lose out to the Chargers based on the third NFL divisional tiebreaker, record in common games.

Games to watch this week:

Giants(#15) at Packers (#2) – The two playoff contenders meet in Lambeau in a must-win game for both franchises.  Prediction:  Packers win.

Seattle (#29) at Tampa Bay (#21) – Seattle can lose in Tampa Bay and still get into the playoffs with a win over St. Louis in week 17, but Tampa must win to keep hope alive.  Expect both teams to come hungry with a win by the Bucs.

San Francisco (#28) at St. Louis (#27) – Two division rivals in a win-or-go-home scenario, directly next to each other with less than one point of rankings separating them?  It may be the Toilet Bowl, but it should be an exciting game.