There’s no phase in sports guaranteed to make physics nerds cringe like “that team has momentum.” When figuring out how a car will drive or an airplane will fly, Newton’s laws tell us what the vehicle’s momentum will be and how we can change it. No equivalent exists in sports, although you wouldn’t know it listening to all the prognosticating that goes on in the media. Just don’t ask anyone to define it. There were worries about Colorado against Columbus because they lost momentum… in the last few minutes of their match against Real Salt Lake. FC Dallas? No chance because they dropped their last two, never mind both were on the road to the only two teams ranked higher than them in the The Power Rank. And let’s not forget Los Angeles Galaxy, top of the table for most of the year but fashionable picks for an early exit against the Seattle Sounders. The only easy pick where the favorite was expected to win was New York over San Jose, but as we’ll see, this also flies counter to the “momentum” argument.

Here at The Power Rank, we know that a sample over a few games isn’t enough to prove anything… but it can be enough to disprove some things. In this case, the question is: can “momentum” at the end of the regular season predict the first playoff results for each team? Well, first we need a definition of momentum, and just in case you think I’m trying to con you, I’ll give you two: points earned over the last 5 games and points earned over the last 10 games. Here you can see the teams ordered by the last 5 games’ momenta. 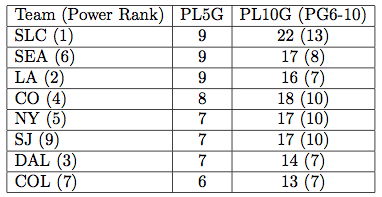 Both measures give a similar ranking, with only the Rapids leap-frogging LA and Seattle if the last 10 games’ points are considered, and then only by 1 point.

What’s most telling about this ranking is how well it agrees with The Power Rank’s ordering, with only the Sounders and FC Dallas appearing out of place. So you might say ‘ha!’, maybe momentum can beat The Power Rank. Not so fast. A look at the schedule provides a different explanation. In their past 10 games, Seattle was fortunate to only play two playoff teams (Colorado and Salt Lake), thereby racking up points against teams at the bottom of the table. Conversely, Dallas has played six of their last 10 against play-off teams, including LA and Salt Lake on the road. Of their other four games, they picked up three wins and a draw.

Finally, consider the second set of games contributing to the last 10, games 6-10. If we ranked teams based on those 5 games and compared them to The Power Rank, the Sounders come back to earth and LA and Dallas appear as the only aberrations being a bit too low. We’ve already discussed Dallas, but in games 6-10, LA drew the Fire and lost to San Jose, both on the road and both a bit unlucky. So basically, The Power Rank explains most of the trends based on results for the entire season, and the streaks can be attributed to aspects natural to sport: strength of schedule, home field advantage, and of course, a little bit of luck.

So how did the momentum rank do? Well, it did have the Rapids overcoming Columbus, but also New York drawing at San Jose, Seattle getting it done against the Galaxy, and of course, the kings of momentum, Real Salt Lake, should have dominated FC Dallas. It didn’t go down that way, but to be fair, The Power Rank went 2-2 as all home teams were favorites given the ranking. So what’s the difference? The Power Rank is based on what each team earned on the field during the whole season, valuing consistency over finishing the season at home playing bottom table teams. And aside from a few unlucky breaks, we can use The Power Rank to explain almost all the observations about “momentum”. So when it comes time to make your post-season picks, remember your best bet is steady and consistent rather than the current flavor of the week.

This week offers the second legs of the first round playoff matches. Thanks to getting results on the road, the Galaxy and Red Bulls are in good shape to advance to the next round, in line with The Power Rank best estimate. Even though they’re traveling to Columbus, the Rapids are still favored to advance. So what about the matchup predicted by The Power Rank to be the most one-sided? Well, don’t count out the Royal Army of Salt Lake City yet as home field advantage coupled with their top rank gives the defending champs an even chance to advance against a talented Dallas side, especially when considering extra time is played at altitude in beautiful Sandy, Utah. But from the soccer fan’s perspective, the best part is all the ties are only separated by one goal, so we should be in for a weekend of great games. Enjoy!